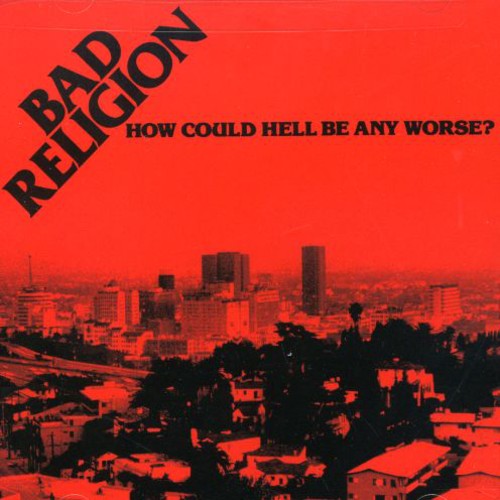 How Could Hell Be Any Worse
Artist: Bad Religion
Format: CD
New: OUT OF STOCK. Contact us for availability.
Wish

''How Could Hell Be Any Worse?'' is the first full-length album released by influential punk band Bad Religion. It was financed by a $1,000 loan by guitarist Brett Gurewitz's father. Its success surprised the band when it sold 10,000 copies in under a year. The sound of the record was vastly improved from their first release, 1981's self-titled EP. The record was originally released as an LP in 1982 and again in 1988 with a different catalogue number and Epitaph's current address. It was released on CD as part of the 1991 compilation, ''80–85'', and was remastered for the 2004 re-issue of this album.

''How Could Hell Be Any Worse?'' is the band's first album recorded with Pete Finestone on drums and also their only full-length album to date with original member Jay Ziskrout, who played drums on each track not recorded with Finestone. Though not yet credited as a member of the band, future guitarist Greg Hetson, who was in Circle Jerks during this time, also did a guitar solo on "Part III".

"We're Only Gonna Die," and "Fuck Armageddon... This Is Hell," became fan favorites and are staples of the band's live show to this day. Many later punk groups cite this album as their main influence. On the back of the cover is one of Gustave Dore's illustrations of Dante's Divine Comedy. - Wikipedia