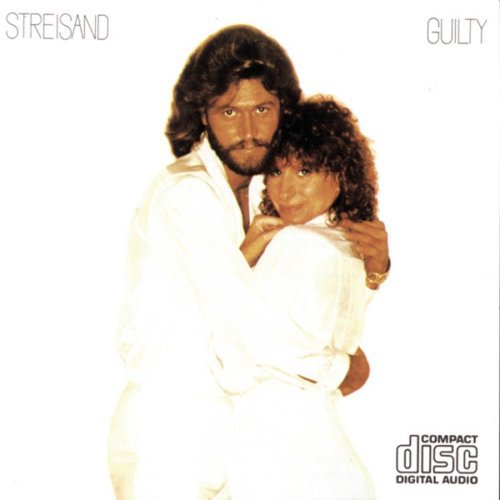 This 1980 release is Streisand's best-selling album. It was produced by & all songs were written or co-written by Bee Gee Barry Gibb. Includes the smash singles "Woman in Love ", "What Kind of Fool", "Promises".

''Guilty'' is an album released by Barbra Streisand in 1980. After the success of the Bee Gees in 1977/1978 there was some time to perform songwriting for other artists and Barbra Streisand asked Barry Gibb to write an album for her. It became her best-selling album to date with sales (according to Streisand's official website) of over 20 million copies and was produced by the Bee Gees' Barry Gibb and the Bee Gees' regular production team of Albhy Galuten and Karl Richardson.

The title track, a duet between Streisand and Gibb, won the Grammy Award for Best Pop Performance by a Duo or Group with Vocal in 1981, and was a #3 Billboard Hot 100 hit. The first single "Woman in Love" became one of the most successful songs of Streisand's music career and spent a total of three weeks at the #1 position in the Billboard chart. "What Kind of Fool", another duet with Gibb, reached #10. The fourth single, "Promises", a more disco-oriented track released in May 1981, reached as high as #48. This song was also released on Streisand's first commercially-released 12" disco single as a solo artist following her 1979 duet with Donna Summer

Streisand released a sequel to this album, ''Guilty Pleasures'', in 2005, also produced and largely written by Gibb. - Wikipedia