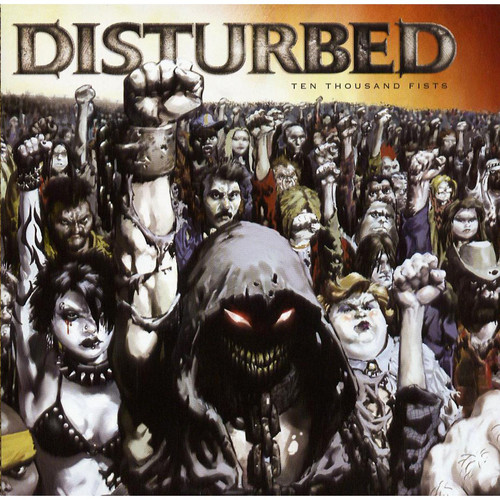 Double vinyl LP pressing. Ten Thousand Fists is the third studio album by the metal band, originally released in 2005. It became Disturbed's second consecutive #1 debut on the Billboard 200 in the United States. Ten Thousand Fists marks the first album with bassist John Moyer who replaced Steve Kmak following his dismissal in 2003. However, he was considered a session musician during the time of recording, and only became a full-time member during the tour supporting the album. Formed in Chicago in 1996, Disturbed have sold 12 million albums globally, scored nine # 1 singles at Active Rock Radio, and had four consecutive albums debut at #1 on the Billboard Top 200, a feat shared only with Metallica and Dave Matthews Band. Their quadruple-platinum 2000 debut The Sickness formally announced their arrival as hard rock leaders, with that status solidified by their subsequent gold-, platinum- and double platinum-certified records as well as a Grammy Award nomination in the category of "Best Hard Rock Performance" for "Inside the Fire" in 2009.