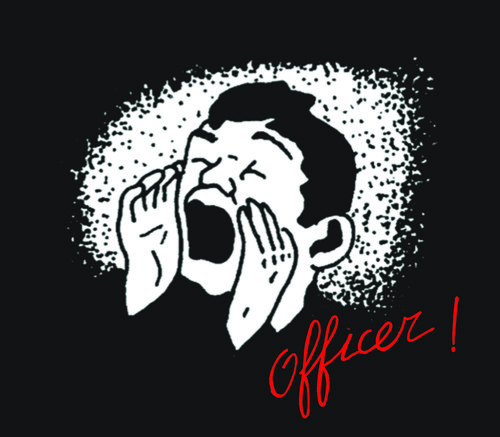 Officer! Was founded by Londoner Mick Hobbs. His roots were in the RIO scene of the late 70s and early 80s. Initially he worked as guitarist in The Work, subsequently he became closely associated with This Heat and their Cold Storage Studio in Brixton, working with artists like Family Fodder, Catherine Jauniaux or Zeena Parkins. The band's forst album "8 New Songs By Mick Hobbs" came out in 1982 on casette only. It forms the first half of this CD re-issue. With the exception of two songs that came out on 7" on Blackest Ever Black in 2014, the album has never been re-issued in any form, the cassette is nearly impossible to get. It marked the birth of a unique songwriter and improviser with a gift for melodies, difficult arrangements and poignant lyrics. The second album, "Ossification", arrived a year later and has been made available on CD. The third album, "Cough" was recorded and released in France in 1985. It is often overlooked in the band's discography, a fate that many cassette releases share. Again, this is the first time that these songs are being made available. Both tapes have been remastered in 2018 and are presented here for the first time ever in digital quality. Officer! #are one of the most important bands in the Britihs art rock scene. Don't miss this rare chance to get hold of two long lost albums.