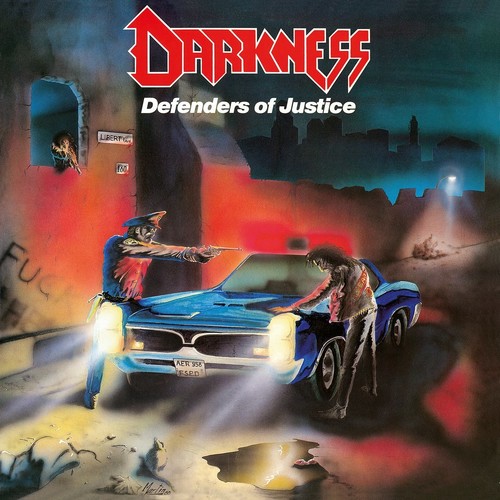 There's no doubt about the fact that the Ruhr area was the birthplace of German Thrash Metal. Kreator, Sodom, Living Death - and even one-hit wonders such as Violent Force (Velbert) - all came from working-class towns graced by bleak industrial buildings and mass unemployment. The same goes for Darkness. They formed on the spot on December 1st 1984 after a legendary gig at the Zeche Carl in Essen, where Destruction, Iron Angel and Tormentor (an early incarnation of Kreator) had been playing. Darkness' first album Death Squad (originally released in 1987 on Tales of Thrash, a subsidiary label of GAMA) became an instant Teutonic Thrash classic. "We had already demoed 'Iron Force', 'Death Squad' and 'Phantasmagoria'," explains vocalist/drummer Lacky. "And there was also 'Armageddon' but we had given this one to New Renaissance Records. The rest of the songs on Death Squad was all brand new material. I always thought Death Squad was the best we could deliver at this point in time. We had a bit of time pressure and no real experience in the studio. Bearing all this in mind, Death Squad was quite an achievement for us." In 1987, Noise Records, Steamhammer and Roadrunner were probably the most important labels for German Thrash Metal bands. However, Darkness signed with GAMA. Lacky explains: "GAMA had their own little studio, international distribution, we were promised free copies of the album. This all sounded quite attractive at the time. We discovered much later that not everything was as nice as it sounded." The record sold in reasonable quantities (there was talk of 25,000 copies having changed hands) but Darkness did not make it into the Top 3 of German Thrash Metal (Kreator - Sodom - Destruction). They missed out on a nationwide tour to support album sales! Two more albums followed: Defenders Of Justice and Conclusion & Revival. Recently, Darkness have played a couple of high-profile re-unions shows and will continue to do so