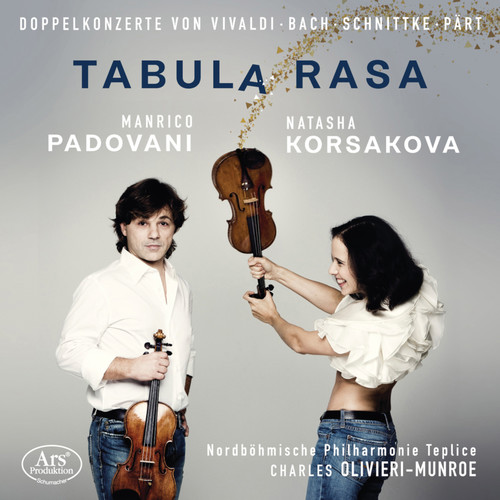 After a heyday in the 18th century, the double concerto was hardly cultivated in the 19th century: In the virtuoso cult of this epoch, there could only ever be one, which changed again, a little bit, in the 20th century. The violinists Natasha Korsakova and Manrico Padovani each present two exemplary double concertos from the Baroque and Classical Modern periods on ARS PRODUKTION. "A forceful lyricist"... "An enchanting talent..." These are some of the attributes used by music critics to describe Manrico Padovani's impeccable technique and highly expressive, virtuosic display. Following his debut recitals at the Lucerne Festival and at the Stadtcasino Basel, Padovani has gone on to perform all over the globe. Natasha Korsakova, a violin virtuoso of Greek-Russian descent, is one of the most sought-after soloists of her generation. Germany's Suddeutsche Zeitung described her playing as a "stunningly beautiful listening experience." Korsakova is in high demand with national and international orchestras and music festivals. The Frankfurter Allgemeine Zeitung praised her for her "polished technique, her stylistic confidence, musical sensitivity" and notable charisma. Her repertoire includes some 60 violin concertos in addition to chamber music.