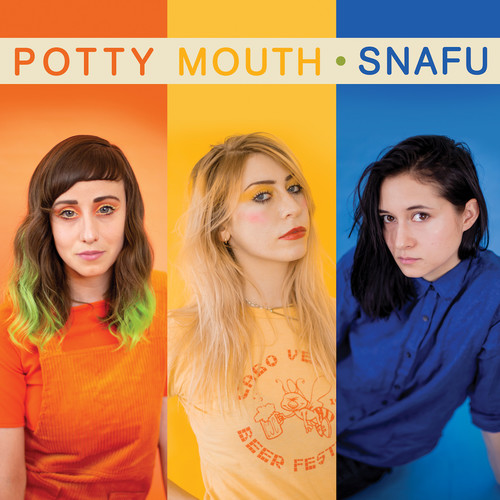 Blue Vinyl LP. It's hard to imagine that anything in today's tilt-a-whirl society could ever be considered a "situation normal," but needless to say-most everything is all fucked up, no matter how you slice it. It's all decidedly fouled, so the secret is in how you embrace the chaos. For Potty Mouth, the LA-based pop rock trio of Abby Weems (vocals/guitar), Ally Einbinder (bass), and Victoria Mandanas (drums), the term SNAFU-Situation Normal All Fucked Up-has become a rallying cry, one that inspires them to forge on no matter the odds and to trust themselves in the process. And, naturally, it's the name they gave their long-awaited new album. Potty Mouth arrived in the early 2000-teens as a feel-good punk rock force from the fabled Western Massachusetts scene. Formed while Einbinder and Mandanas were students at Smith College, and Weems a local rocker, they quickly made a national name for themselves with their brand of art-sensible power-punk wrapped in a catchy, fist-pumping package. Their Sun Damage EP in 2012 and their debut LP, 2013's Hell Bent, put them on the map, and the subsequent years of touring and an acclaimed self-titled EP in 2015 reinforced their status as one of punk's most rock-solid and talented upstarts. Fully realizing their self-empowered status, the band is releasing SNAFU on on their own terms under the independent label Get Better Records, an outfit co-run by Einbinder and her partner, Alex Lichtenauer. SNAFU will be released on limited edition blue vinyl w/ bonus 7" of two unreleased tracks via indie stores, standard blue vinyl, CD and download.