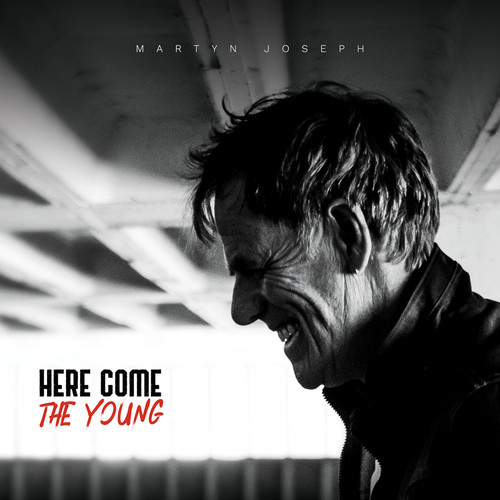 Acclaimed singer-songwriter Martyn Joseph returns with new album Here Come The Young which was produced by Gerry Diver (Tom Robinson, Lisa Knapp, Sam Lee) & Martyn says of his new album, "The songs are exploring uncertainty to varying degrees through different subject matter both in the personal and political. I hope for those who listen it will be the sort of record that takes you on a journey and leaves you buoyed and hopeful at the end, despite the fact that we go to a few tough places." Born in Penarth near Cardiff, Martyn is gifted with the rare ability to speak to the soul with his expressive and poignant lyrics and has enjoyed a career spanning 35 years to date, over a half a million record sales and thousands of live performances. He has created his own style and reputation as a stellar songwriter, jaw-dropping guitar player and mesmerising performer, and social justice is an essential part of his music, which has been recognised with various humanitarian awards and plaudits. On Here Come The Young, his songs are imbued with an optimism at a time when it is not easily found. Running throughout the album is a sense of hope and belief in the good of the majority, and that this will overcome the loud, cynical noise that pervades. For Joseph, songs are photographs of moments and visions be they good or bad, his lyrics encourage people to fight fear, cynicism and negativity and the rhetoric of those who hold power. The title track 'Here Come The Young' suggests the young don't have the same baggage of past generations and are more open and inclusive On 'Loves Majority', a protest song of sorts, the greater collective good will always outweigh the bad. There is a heart-breaking tribute to those who work for the betterment of others on 'This Glass'. Self-doubt is the subject in 'Oh My Soul', encouraging belief in one's journey. Six years ago, Martyn visited the West Bank in Palestine to play a festival and this became a catalyst to him forming a non-profit organisation to work with grassroots projects across the world. It was his experience in Gaza that lead him to write 'Take Back The Sky', where young kids fly kites as a symbol of freedom 'the wrist that holds the string of dreams for one brief moment takes back the sky'. Martyn has previously toured with the likes of Art Garfunkel, Jools Holland, Ani DiFranco, Suzanne Vega, Mike and The Mechanics, Joan Armatrading, Celine Dion and Shirley Bassey. In 2016, in addition to playing over 170 shows worldwide, he was asked by the EFDSS and British Parliament to write and perform as part of "Sweet Liberties" with Nancy Kerr, Sam Carter and Maz O'Connor to mark 800 years of British democracy. One of his songs from this, "Nye" celebrating Nye Bevan, the author of the NHS, has been enthusiastically received by audiences everywhere, as well as having BBC national airplay on Mark Radcliffe's Folk Show and Tom Robinson's 6 Music show.