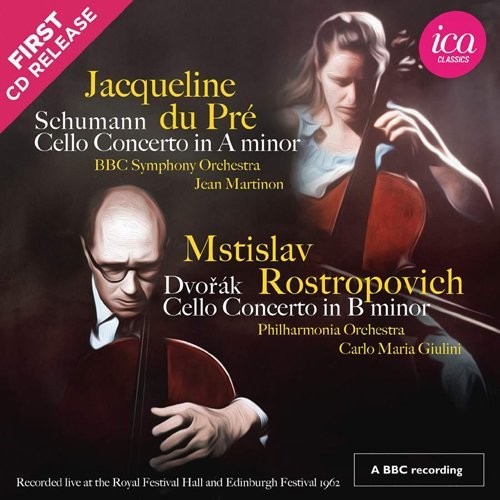 This previously unreleased live recording of Jacqueline du Pré playing the Schumann Cello Concerto is her first public performance of the work, given in the Royal Festival Hall on 12 December 1962 with Jean Martinon conducting the BBCSO. She had worked intensively on the concerto with Paul Tortelier in Paris prior to this concert. When Du Pré studied the Schumann with Mstislav Rostropovich at the Moscow Conservatoire in 1966, he exclaimed, 'This is the most perfect Schumann I have ever heard'. The 1962 live performance of the Dvorák Cello Concerto by Rostropovich has also never before been released. He is partnered by Carlo Maria Giulini, who went on to to make a studio recording of the same concerto with him in 1977. The Times critic described this Edinburgh Festival performance as an 'exciting' and 'emotionally supercharged interpretation' with Giulini's reading 'full of finely wrought points of detail'. The attractive bonus features Rostropovich and his wife Galina Vishnevskaya in the Aria from Villa-Lobos's Bachianas Brasileiras.