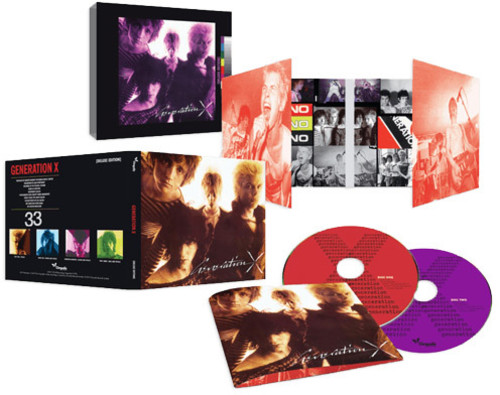 Chrysalis Records are proud to release a deluxe edition of Generation X's debut album from 1978. Formed in late 1976 by Billy Idol, Tony James and Derwood Andrews with Mark Laff joining in early 1977. They signed to Chrysalis in the Summer of 1977, with their first single 'Your Generation' being released in the September. Incidentally, they were one of the first punk bands to appear on the BBC TV's Top of The Pops, followed closely with subsequent singles 'Wild Youth' and 'Ready Steady Go'. Their debut album 'Generation X' produced by Martin Rushent (The Stranglers, Buzzcocks, Human League), was released in February 1978, reaching number 29 in the UK charts. This expanded deluxe edition CD set has been newly remastered from the original production tapes and includes 11 previously unreleased recordings. CD1 contains the original UK 11 track album with CD2 including all the A and B-sides of their singles from the period, 11 previously unreleased outtakes, a single mix and several mixes made by engineer Alan Winstanley (Madness, Elvis Costello, Morrissey). This 2CD, 8-Panel Digipak with O-Card and 12 page booklet