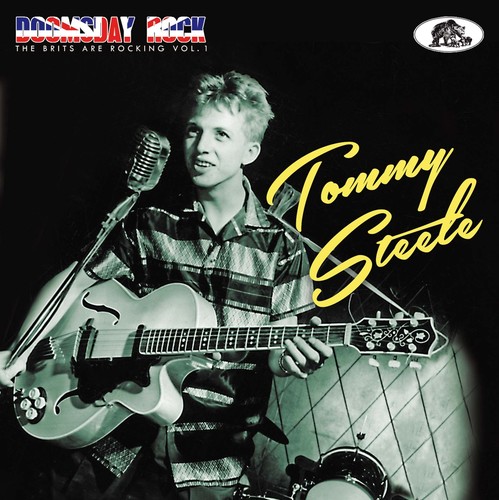 Extensive liner notes, written by UK music critic and biographer David Gibsone. Rare photos and illustrations in the booklet. Tommy Steele was Britain's first pop star. The story of how Tommy fused the new energy of American rock 'n' roll with his own passion for music styles from all over the world is told in the first of a series from Bear Family Productions: 'Doomsday Rock - The Brits Are Rocking'. In the summer of 1956, London was throwing off the grey blanket of post war austerity. New coffee bars and clubs were thronged with young people looking for new fun and entertainment. That summer Tommy Hicks (Steele), Lionel Bart and Mike Pratt [Randall and Hopkirk (Deceased)] met at a party in a beatnik commune called the 'Yellow Door. ' Just down the road, under the railway arches, was a café called 'The Cave. ' They decided to form a group, and call themselves The Cavemen - and the rest is Pop History. On the CD, Tommy's first chaotic recording session, the surreal Rock With The Cavemen keeps up the pace with his covers of Ritchie Valens' Come On Let's Go and Freddie Cannon's Tallahassie Lassie. More of Tommy's own songs are included - Teenage Party, The Trial, Hey You!, and an instrumental in which Tommy does a fair impression of a drunk, Drunken Guitar, plus many more!