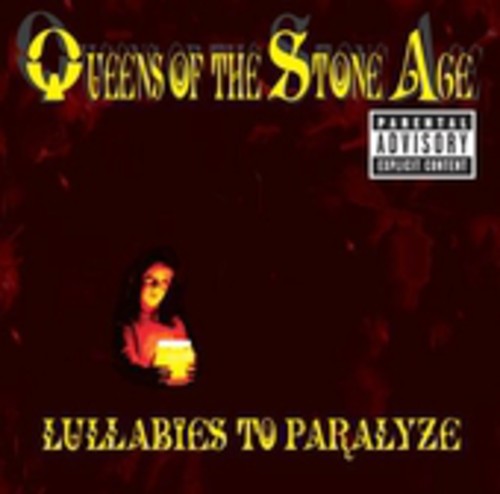 Queens of the Stone Age are back with their most groundbreaking work to date, LULLABIES TO PARALYZE. Their new offering is a powerful, sonic ride that further demonstrates how relevant this band is to today's music scene. Joined by ZZ Top's finest, mark Lanegan and a few other surprise guests, this is the epic, rock album that music listeners have been waiting for.

''Lullabies to Paralyze'' is the fourth studio album by hard rock band Queens of the Stone Age and was released on March 21, 2005. Debuting at number 5 on the Billboard chart, the album sold 97,000 copies in America during its first week of release, eventually topping over 342,000 copies as of March, 2007 according to Nielsen Soundscan. The album has been certified gold in the UK, where it has sold over 100,000 units. It is also the band's first album to be released after Nick Oliveri was fired from the band. - Wikipedia

On 2002's Songs for the Deaf, Queens of the Stone Age mainmen Josh Homme and bassist Nick Oliveri leapt from metal geek to celebrity chic with one Dave Grohl snare roll. Grohl's guest-drumming brought the lore of Nirvana, and for modern-rock-a genre never to evolve past its thumb-nosing infancy once its founders disappeared into the soil (Cobain, Staley), rehab (Weiland), and willful obscurity (Vedder)-there can be no greater honor. Grohl was Prince Charles to Homme and Oliveri's William and Harry as he rechristened them rock's unlikely new royals, silver tuning-forks dangling from their snarled lips.

That Queens' music comes off distant and even, at times, lifeless works to their favor. Surrounded by guard dogs like Screaming Trees' Mark Lanegan, Dean Ween, and Marilyn Manson's Twiggy Ramirez, Homme and his celeb-strewn crew can afford to sound walled off. A thick layer of gauze surrounds every Queens song, be it via metal's peculiar production style that over-stresses mid-level frequencies, Homme's done-it-all, Philip Marlowe-inspired monotone, or the drug references (and, if reports and reality are to be believed, drug use) that fuelled songs like 2000's breakthrough "Feel Good Hit of the Summer."

Queens' first album without bassist Oliveri, who left tempestuously, sounds almost exactly like the previous two, which suggests that guest spots by Lanegan, Ween, Ramirez, P.J. Harvey, ZZ Top's Billy Gibbons, Distillers frontwoman Brody Dalle, and Garbage's Shirley Manson are mere cameos in this modern-rock version of Robert Altman's legendary film Nashville, and that Oliveri was just riding shotgun in the Queens boogie van all along. Guitars still churn mercilessly, the arrangements are still pressurized for submarine-depth, and the riffs continue reaching toward the great encore in the sky.

While "Burn the Witch" and others demonstrate a new, unhealthy blues-rock fixation, Lullabies primarily furthers Homme's considerable talent for writing too-fast ballads and too-slow rockers, songs simultaneously furious and placid. "The Blood Is Love" drifts on a peaking guitar riff, with Homme's voice, soft and uncertain, coming and going like a wandering spirit. And the beautifully flimsy "I Never Came" builds around a single, wavering guitar-string strum and a stripped drumbeat as Homme's gloriously imprecise falsetto sobs, soars, and collapses.

"Everybody Knows That You're Insane" satisfies the air-guitar prerequisite even if its overwrought, Soundgarden-inspired verses plod, and "In My Place" revisits the muted fervor of "Go With the Flow." Lullabies lacks a "No One Knows," but then again, Deaf didn't have "Long Slow Goodbye," an epochal reworking of Al Green's baptismal "Take Me to the River." Homme hears not the call of Reverend Green's God, but nostalgia for sin, for days when guilt was but a breeze and repentance was someone else's bag. And though Homme sounds remorseful as he takes his leave-of love, life, whatever-it's the practiced tone of the nomad and the celebrity, the sort who knows a thousand words for goodbye but none for good morning.