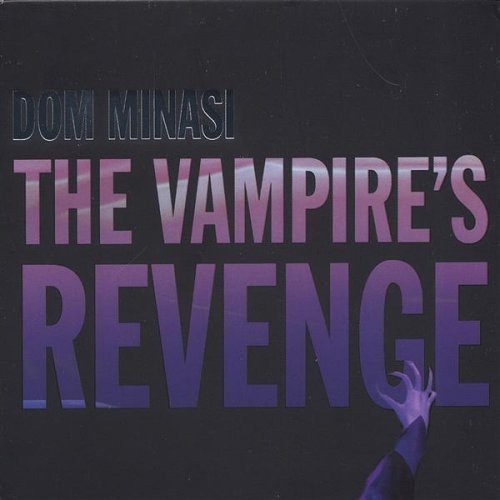 Thanks To Howie Mandel * Jazz Journalists Association/Downbeat Fred Jung * All About Jazz -San Francisco Dan McClenaghan * All About Jazz Eric Quick* All About Jazz Peter Sanchez *The 213 For NamingThe Vampire's Revenge As One of the Best of 2006 What Critics Are Saying About Dom Minasi's The Vampire's Revenge '...a landmark recording.. compelling.. intelligent and exciting...'?Russ Musto .".. eventful epic of diverse proportions... immensely challenging music'. The Downtown Music Gallery -Bruce Gallanter " Something you can really sink your teeth in" Glen Astarita - Downbeat Magazine " (Writing about VR)" No one, however, is playing more marvelously than Minasi, whose percussive, masterly attack is both technically frightening and utterly focused on serving the music." Paul Olsen - All About Jazz "With the release of "The Vampire's Revenge", Dom Minasi has surpassed his previous endeavors a hundred fold and has assuredly become THE definitive voice for the new music scene." Lyle Robinson Jazz Guitar Life I loved the Dom Minasi (The Vampire's Revenge) Loved it! Loved It! Mitch Gruber - WWRW FM Radio " ...magnificent. The writing and playing is exemplary & world class" John Hammel - WNTI FM Radio "Pulitzer Prize material...triumphant...astonishing" Jochem van Dijk - All About Jazz "..one of the most ambitious and best free jazz outings of recent years." Dan McClenaghan - All About Jazz "... Minasi's adventure grabs the listener and won't let go" Jim Santella - All About Jazz ".. something completely different.' D. Oscar Groomes- O's Place Jazz News Letter ..." blood drained delirium.." David Fallo- Celebrity Café " Expect the unexpected." Paula Edelstein -All Music guide " With the Vampire's Revenge, Dom Minasi grows out of downtown into the international jazz arena." Rex Butters- All About Jazz LA "Al dente" or right on!" Cosimo Parisi - Music Boom Italy "I cannot fail to say that Dom Minasi's latest is really remarkable - even by his high standards! " Doug Spencer - ABC Radio National -Australia The Vampire's Revenge is a long haul, but the consistent brilliance of Minasi's recruits justifies the roomy settings.-Hank Shteamer - Time Out. NY "It is the most engaging new music I have heard in years." Abdel Naroth KVSC Radio St. Cloud Univ. MN. "..shrieking darkness, demonic sensuality & wicked humor." Taran Singh Free Radio Angers France "...a vivid, dramatic, subtly menacing (and occasionally tongue in cheek) portrait that remains in the mind long after the music has ended'. Bruce Crowthers - Jazz and other obsessions "... a double-disc of jazz with bite (yeah, I said it)". Wax Poetics "One of the most inventive guitarists in modern jazz. DOM MINASI begins the last segment with his new 2 CD THE VAMPIRES REVENGE. We played "The Dark Side" with discordant elements of piano guitar, bass and drums interacting polyrythmically with dramatic intonation as if Nosferatu was lurking on the silent screen. " Dick Crockett "The Voice" 88.7fm Sacramento, Ca. "...you'll have to go a long way to find a large scale project in contemporary jazz as convincing and rewarding as this" Dan Warburton Paris Transatlantic Magazine "... this is going to be one of the best releases of the year". Marshall Bowden Jazzitude " Dom Minasi's latest release, The Vampire's Revenge, is a courageous and volatile musical achievement." Brian Holland Modern Guitars "...a carefully arranged and brilliantly executed concept piece for even the most difficult to please." Joe Knipes Jazz Improv Magazine "...is a collective triumph, but most of all a triumph for the composer and leader." John Elyes One Final Note "...vampire's life through cinematic scores...could be the score to a bizarre Fellini film." One Way Magazine "...a genuine tour-de-force that sets a new standard for the give and take between the worlds of literature and music." Florence Wetzel All About Jazz New York " remarkable"..."exhilarating explorations." Phil Zampino The Squids Ear " ...a set of smart, never-showy compositions..." Kurt Gottschalk Coda Magazine- Canada "If you can handle a musical challenge, this is for you. Amazing stuff !" Scott Heller- Aural Innovations "These players have a canny, intuitive bond that consistently yields good music."...Signal To Noise "...the mix of flutes, brass and strings evoke a rather sinister and entertaining image." Jazz Times "...the overall effect is that a good deal of originality and resourcefulness have been combined for a cutting edge recording." Dr. Roberta E. Zlokower -Roberta on the Arts.