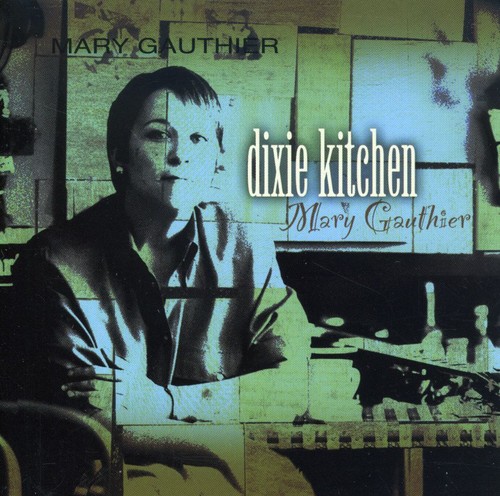 Mary Gauthier's third album 'Filth & Fire' appeared on many of the top CD of the Year lists throughout the country, with Jon Pareles in The New York Times ranking the album as the #1 Independent Album of the Year. 'Unflinching honesty makes Filth & Fire a triumph, the best singer-songwriter album of the year...' reported NO DEPRESSION, shortly after the album's release in July 2002. 'Filth & Fire should establish her as one of the finest artists in the whole alt country field,' reported the Washington Post. 'She is the People's Heart of Alternative Country,' said media in Ireland after a recent European tour, and it is a sentiment that is shared by audiences everywhere Mary tours-in the U.S., in Europe, and most recently this summer, on festival stages throughout Canada. A Louisiana native, Mary studied philosophy for five years at Louisiana State University before traveling east to study at the Cambridge School of Culinary Arts. Mary opened an award-winning restaurant, Dixie Kitchen, in Boston's historic Back Bay, later selling the restaurant to pursue music full-time and moving to Nashville. Today, Mary tours the United States extensively and continues to tour in Europe several times each year. Ever breaking new ground, in summer 2003 along with being invited to perform for second time on the Newport Folk Festival's mainstage, Mary will tour extensively in Canada performing in major festivals such as the Edmonton Folk Festival, Calgary Blues & Roots Festival, Festival d'ete de Quebec, Winnipeg Folk Festival, Stan Rogers Folk Festival, and Canmore Folk Festival, as well as other venues. In her third CD 'Filth & Fire,' produced by Texas-based Gurf Morlix, Mary Gauthier introduces her audiences to characters whose moral qualities are tied to spiritual struggles with cords that are thin, frayed, and well-worn. Here, the listener will find some left hanging by a thread...did she jump or learn to pray out there on The Ledge? There are those who are holding on trying to find dignity like Davey, celebrating Christmas in Paradise while living under the Cow Key Bridge. People crack, crumble and burn in 'Filth & Fire' as they deal with the everyday dramas that depict universal themes of love vs. Lovelessness, community vs. Loneliness, and despair vs. ^#^faith. But, they're dealing. And for the artist, that seems to be what matters most. From the 'royal denizens' of Camelot Motel, with 'damn good reasons for their sins' who seek anonymity not absolution, to the 'dirty air, dirty laundry, dirty money, dirty rain,' of Mary's Louisiana birthplace in Burnin' Sugar Cane, Mary Gauthier's fans who first embraced 'Drag Queens in Limousines' will find plenty of the grit they love. The US release of her sophomore CD 'Drag Queens in Limousines,' was nothing short of phenomenal-within six months Mary Gauthier was touring coast to coast and accepting invitations to perform on the main stages of more than a dozen of the most prestigious festivals in U.S., from Strawberry Music in California to the Newport Folk Festival in Rhode Island, and the CD received national airplay and media attention in publications like Billboard and No Depression in the US, and international praise in Rolling Stone (4 stars), MOJO (Album of the Month), Q Magazine, Uncut, Les Inrocktibles, and Country Music People, as well as awards such as the Independent Artist of the Year and a Silver Star from Crossroads Magazine. Dixie Kitchen is Mary Gauthier's first CD -- get it while you still can! It's produced by Crit Harmon who also produced 'Drag Queens in Limousines.' Mary Gauthier will be recording her fourth album in October 2003 with Gurf Morlix producing. The CD is scheduled for a spring 2004 release.
This website uses cookies to personalize content and analyse traffic in order to offer you a better experience.
I accept Learn More
back to top