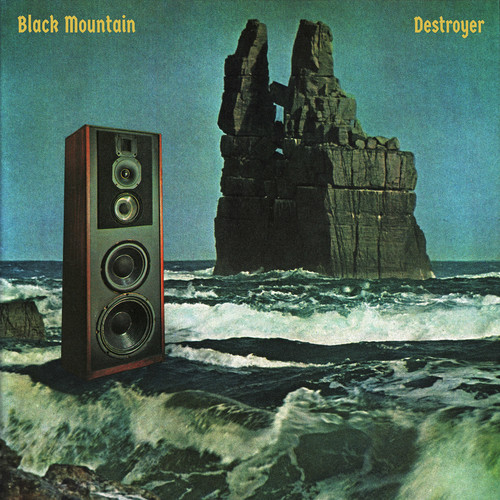 2019 release from the Canadian rock band. Destroyer is structured around that first time behind the wheel of a hot rod. The fat, charging "Living After Midnight" riffs of opener "Future Shade" is, according to band member Stephen McBean, 'Straight outta the gates. FM radio cranked.' He ain't kidding. The song, and all of Destroyer for that matter, seems to exist at that crucial nexus of the early-to-mid 80s Los Angeles when a war between punk and hair metal was waged. Black Flag's "My War" tried and failed to keep the peace. But in the trenches, some hybrid ghoul was beginning to form in bands like Jane's Addiction and White Zombie. Shacked up in his rehearsal space, McBean found an old chair in an alley, spray painted Producer on the back and pressed record. Friends from the endless rock'n'roll highway were invited over and 22 songs were brought to life. While some were laid back into shallow graves to dig up once again at a later date, the remaining skeletons were left above ground - given organs, skin, eyes, and the opportunity to grow their hair real long and greasy. Some of these zombie hesher jams were sent on a journey to Canada where longtime band member Jeremy Schmidt, slipping on the Official Collaborator satin jacket, had at them with his legendary synth arsenal. As he added long owing robes, sunglasses, driving gloves and medallions, the undead songs began to transform into the new breathing creatures that make up Destroyer. Schmidt's work with these songs turned out to be the transformative glue for this new era of Black Mountain.