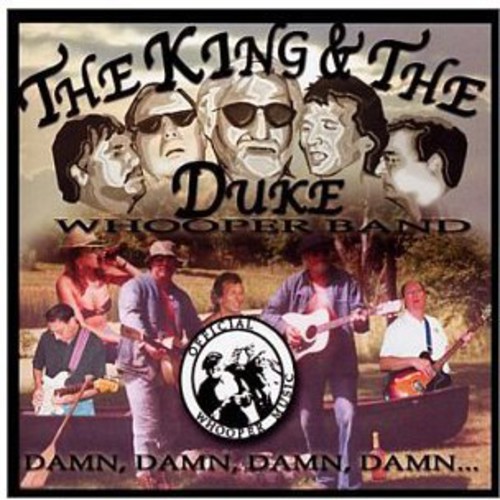 WHY? In late 1999, on a night when the moon shown a blood - fire red, THE KING AND THE DUKE WHOOPER BAND Were awakened and christened from longtime hibernation by the spirit of William Blake sent to enlist their power with this message: 'Rouse up, O Young of New Age! For the time is again approaching When Art will be Degraded and Imagination Denied and War will Govern Nations! Set your foreheads Against the Ignorant and the Philistine ... for we have them in the Camp, the Court and the University, who would, If They Could, for ever depress...and Prolong Corporeal War!' Surrounding Blake, in attendance, were kindred spirits of John Lennon, Woody Guthrie, Jimi Hendrix, Bob Marley, Wes Montgomery and Frank Zappa who concomitantly chanted the following: 'Now is the Time! The Meek must get Strong! They are Tired of being Fearful! They are sick of Terrorism, heinous Crime, collapsing stockmarket, Satanic Insecurity! Now is the Time! Empower America with your Trope! Give them a new Ethos that will Liberate! Give them ...FREEDOM! ...Give them ... DAMN, DAMN, DAMN, DAMN...! WHERE/WHEN Thirty some years ago in a midwestern University, somewhere between the 'Summer of Hope' and the 'Winter of Despair', at the notorious 'Animal House' fraternity on Riverside Drive, A.J.E. Diamond sired the primigenial 'King and the Duke Bluetip Band' into existence to oppose the prevailing ethos of the status quo. Those were the days of confrontation, revolution, change, commitment and high adventure all penuriously rolled into one. It was a small, undermanned composite of long hair, the Beatles, the Cream, Jimi Hendrix, Albert King, Woodstock, idealism, moralistic freedom, liberation from convention, anti - Vietnam war sentiment, and psychedelic indulgence pitted in battle against a vast dogma of convention, materialism, intolerance, ROTC, Rednecks, repression, mediocrity, anonymity, short hair, Beanies and the Lettermen (and we don't mean David Letterman, for at that time, he was truly unheralded - i.e. brotherly entertainment for 'winter quarter fraternity rush'). But the 'Times were a changin'!' and Diamond's nouveau 'originals' began winning victory after victory over the adversary's conservative 'covers' in the notorious Pub battlefields of 'MR.B's', 'Grannie's' and 'The Chug-a-Mug'. Diamond's searing, Albert King -like blues guitar, wailing voice and original satiric songs accompanied by the athletic gyrations and harmonic performance of Sammy F. Scarletti and the afrocentric drum work of Herbie H.H. Swartz were catalytic in implementing the beginnings of a new, and necessary, liberating ethos. Unfortunately, such action came at great cost, as both Scarletti and Swartz suffered mortal wounds during the onslaught which lead to their demise from the cause. Injured but not defeated, Diamond sent out a secret S O S and rallied to recruit new expert prowess and talent to return to the battle. From the fabled group 'Hot Brutch' three were chosen: the glib and sarcastic Armenian guitarist 'Dark Eyes', whose scorching leads are best described as a synthesis of Jimi Hendrix, Eric Clapton and Stevie Ray Vaughan; the intrepid, Jim Morrison sounding, blues singer 'Howlin'Dog Ron'; and the Billy Cox style master bassman, 'DK'. Then last, but certainly not least, Diamond enlisted the merengue influenced rhythmic portfolio of the renowned Puerto Rican syncopator, 'Rico Dinaro', on the drums. The Band was complete. The mission defined: to ensue with the Crusade begun by the original 'King and the Duke Bluetip Band'! Into the Valley of Birchism Played the mighty five. The Lettermen to the right of them, The Four Preps to the left of them, Bobby Goldsboro in front of them Convention and Conformity blared; Storm'd at by Officers-cuts so swell Yet Boldly they played and well, Seeking to conquer the Rightwing of hell Played the mighty five! Though they played so well Into the big sleep they fell. To lay dormant to this very time When summoned by the Spirits' sublime, Again for Freedom and Liberation's sigh To War against Terrorism and pants dick-high! NOW 'Official Whooper Music' is here! The new mosaic of rock/blues/jazz/folk that is obligated to 'take up the gauntlet' of American Freedom and forge a necessary new Ethos that is as Assertive, Cathartic, Liberating, Raucous, Raunchy, Ripping and Sagacious as it gets! Become a SUPERWHOOPER AND JOIN THE BATTLE! WAZOO! The exact origin of this fearsome 'battle-shout' that you hear at the end of this CD is unknown. However, noted Anthropologist Sir A.J.E. Diamond BS. CS. DR. DD. Ph.D. cites exegetic evidence which suggests the following pattern of lineal historicodemographic diffusion: 1) the earliest use of the utterance appears about 1000 BC. Amongst the 'Tribe of Judah' by David and his men as they raid various groups of Bedouins; 2) probably due to Amalekitean thievery and enslavement of some of David's harem coupled with Canaanite/Phoencian navigation skills, the shout surfaces again - centuries later, amongst the Teuton Adrik Blodoxe (Blood-Axe) as he and his marauding Vikings establish their genetic/social influence on what is today known as the 'British Isles'; 3) again - centuries later, the shout springs forth from the lips of a monocle wearing 'Dynamo' and his group of 'Rough Riders' as they race up the slopes of a ridge to attack the Spanish stronghold known as 'Kettle Hill'; 4) today, you can again hear this famous battle-shout of FREEDOM and LIBERATION voiced by the five warriors who made this recording ...right after their irrepressible song 'THE SIG TAU BLUES!'...So make sure you experience the new musical craze known as 'WHOOPER MUSIC'!...WAZOO!!!!!! C2002 The King and Duke Whooper Band LLC.