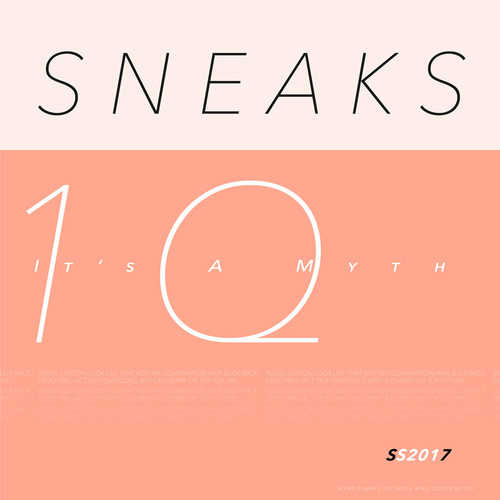 Like most of Sneaks’ music, “Future” is in constant gyroscopic movement—thumping rhythm cutting around deep bass, spoken-word patterns somersaulting through image fragments, childhood nostalgia, and cryptic wordplay. The song is a fitting culmination for It’s a Myth, Sneaks’ second album due March 31, 2017, on Merge Records. With little more than a bass, drum machine, and deadpan vocals, Sneaks, a.k.a. Eva Moolchan, makes minimalist music that takes up space—something she herself has made a point of doing in the male-heavy Washington, D.C., DIY punk scene that has been her home. Moolchan’s compelling songwriting, along with the fervid energy of her shows, prompted breakout D.C. label Sister Polygon to release her 2015 debut Gymnastics, which Merge reissued in September 2016. It’s a Myth builds on Sneaks’ playfully stark approach to post-punk, which, as her hometown City Paper described it, causes listeners to go “from curious to provoked to hungry.” Hungry, in part, because the new album clocks in at just 18 minutes of 10 taut, captivating tracks (but still a feast compared to Gymnastics’ 14 minutes). It also adds Jonah Takagi and Ex Hex/Helium frontwoman Mary Timony, who recorded the album at Timony’s D.C. studio. “She’s got art in her brain,” Timony has said of Moolchan. “Her brain is making beautiful stuff.” Though it flows from influences like Pylon and Bush Tetras, much of that beautiful stuff is hard to categorize or compare to anything else. It’s herky-jerky and fluid all at once, childlike and yet deeply perceptive. “I’m so sure what I’ve been told and I don’t need it,” she sings on “Devo” (a title that appropriately conjures another incarnation of robotic insight). “I don’t know what I’ve just learned but I won’t repeat it.” And while some songs revolve around repetition of the mundane (“Me n me n me n me n you/ You n you n you n you n me” in “With a Cherry On Top”), others are unequivocal confrontation (“You think you got a lot to say/ No you think you need a bigger stage/ You think I can’t contain my rage/ Let me see you bend your breaks” on “Hair Slick Back”). Moolchan calls Sneaks “a character” that she’s playing, and there’s certainly an element of mystery around the persona and her riddles. But it’s also all her, born out of full solo creative control after stints in a number of D.C. bands. “When I'm writing songs, it's actually pretty selfish, because it's like, this is what I need to hear right now in my life,” she has said. It’s surely what others need to hear as well.