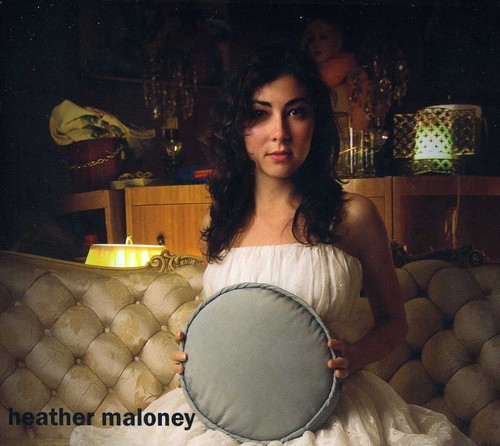 Heather Maloney hasn't been writing songs for long, but she sounds like an experienced pro on her new self-titled album, out in March on Signature Sounds. The Northampton, Mass., singer and songwriter digs deeper, and roams wider, than she has before on songs populated by vivid characters that ultimately trace their way back to her. "I always said that if I didn't write songs, I'd be covered in tattoos, because every song I write is something I want to remember really badly," Maloney says. She has no ink so far. Instead, Maloney is marking life lessons with music, penning tuneful reminders to herself about the little triumphs of love on "Flutter," the solace of redemption on "Turn Yourself Around" and her firm belief that nothing's colder than trying too hard to be cool, an idea that inspired "Fire for You." Although Maloney's influences are largely rooted in what she calls "adventurous folk," she pushes outward on these 11 songs, adding juicy touches of pop, and a little dash of rock 'n' roll on "Iron Bull," a song she wrote after visiting Zucotti Park during Occupy Wall Street. "It's become more multi-dimensional," she says, a change she credits to the way she approached Heather Maloney. She mostly performed by herself in concert when she made her first two albums, so the recorded songs didn't sound the way they did when she played them live. This time, she road-tested the new material with a band (Ken Maiuri on bass, and J.J. O'Connell on drums), fine-tuning songs as she performed them in front of audiences before heading into the studio. "I love playing with a band," says Maloney, who's even done some co-writing with Maiuri. "It's become an integral part of the music." If there's a typical path to becoming a songwriter, Maloney didn't follow it. Although she went to school for music and had done plenty of singing, she only began writing tunes a few years ago after living and working for three years in a silent-retreat meditation center in central Massachusetts. "The biggest motivating factor in writing was probably the experiences that I was having here in my meditation practice," she says. "There was the difficulty of it, the suffering of it, and wanting to channel that into something creative, and on the positive side, the insights that came out of my experiences." Those experiences proved especially inspirational on "Dirt & Stardust," the folky centerpiece of the album. On one level, it's a song about a rambling woman, an idea whose origins were simple enough: "Who doesn't love songs about ramblers?" Maloney says. "It's adventurous, and heartbreaking, but beautiful." On a deeper level, though, it's a song about embracing impermanence. "I don't want these walls to wall me in forever," Maloney begins, singing with the hint of a quaver in her sweet voice tinged with earthy grit. "Don't want to make my home on fenced-in land. We can buy our lot, we can mark our spot but we're travelers whether we like it or not, so please make my castle out of sand." "It led me back to the meditation practice," she explains. "A large part of what this practice is aiming to get you to recognize is that everything is impermanent, and not only to recognize that, but to be OK with that, and maybe even celebrate that. So in this song I'm trying to express this woman's complicated relationship with impermanence." It's not just an expression of the character's relationship. Like most of Maloney's songs, "Dirt & Stardust" is ultimately about herself, though sometimes her songs are personal in a way that only dawns on her later. "I prefer to start writing like I'm writing about somebody else, and maybe it turns out to be autobiographical," she says. "Sometimes it even happens long after I've written the song and I'm performing it live, and I suddenly feel naked, like, 'Whoa, this is really about me, isn't it?' It's just that I'm in a room full of people when I realize it." It's no surprise that they're increasingly crowded rooms.
This website uses cookies to personalize content and analyse traffic in order to offer you a better experience.
I accept Learn More
back to top