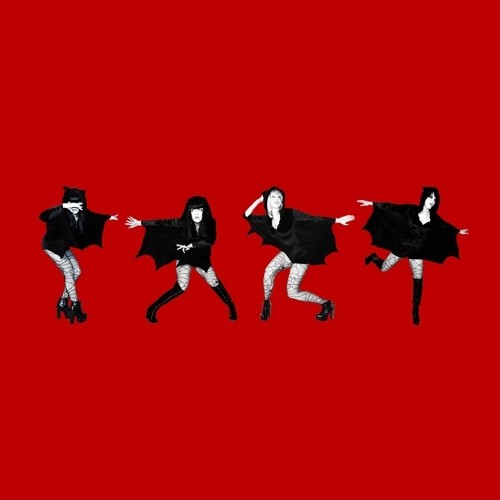 The Darts (US) have exploded onto the scene with a fiercely classic sound that invests deeply in late '60s garage, while incorporating tones of horror-punk and psych-rock. Live, they hurtle through their songs with the reckless abandon of a freight train about to run off the rails, while their calculated musicianship sets a seamless trajectory of grooving hooks and danceable boogie back beats. If Elvira and Wednesday Adams consumed the flesh of man, drank shots of snake venom, started a garage rock band, and played a sweet sixteen party for Rob Zombie's daughter, it would probably sound exactly like The Darts. The band formed in early 2016, after vocalist / keyboardist Nicole Laurenne (The Love Me Nots, Motobunny, Zero Zero) and bassist Christina "Madcap" Nunez (The Love Me Nots, The Madcaps) decided, following the end of The Love Me Nots, to finally utilize the similarities in their creative ambitions to put together the all-girl band they had been talking about for years. Tapping some of their favorite players for the project, like drummer Rikki Styxx (The Two Tens, The Dollyrots, Thee Outta Sites), the band quickly wrote and self-released two debut EPs back-to-back. Soon after this, the singles "Running Through Your Lies" and"Revolution" found instant radio airplay. "Take What I Need" was selected by Sirius / XM's Underground Garage channel as "The Coolest Song In The World," while infamous horror author Stephen King personally tweeted about the band, professing his fandom to the world. Shortly thereafter, the band was signed to notable UK garage label Dirty Water Records, who, in 2017, released their first full length album, Me. Ow. , to international acclaim. The band, now joined by Meliza Jackson (decker. ) on guitar, following a nationwide tour in support of legendary UK punk band The Damned and a spot on the main stage at Punk Rock Bowling this upcoming May 2019, have unleashed their sophomore album, I Like You But Not Like That with Alternative Tentacles Records. Their most refined and alluring album to date, a true reflection of punk, psych, and horror in the modern era.