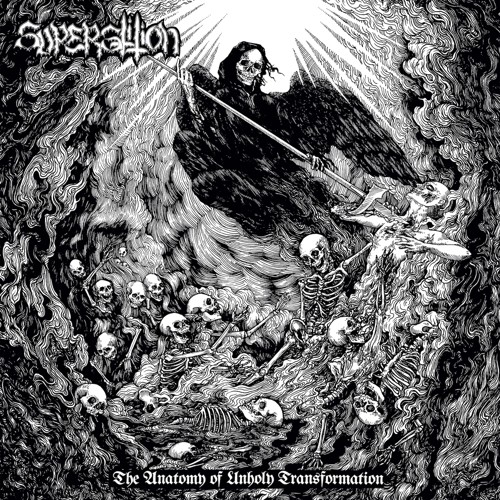 Drawn from the alluvial darkness and consecrated in the materia prima of unconscious fear, Superstition has come forth as the archon of illimitable lunacy, the purveyor of spiritual violence and the demiurge of psychic malfeasance.As the namesake suggests, Superstition has risen from the perennial mire like a psychological parasite, intent on invoking the ageless horrors of the collective unconscious, and born to serve as a reminder that mankind still has much to fear of the dark. Armed with the sonic weaponry of the traditional pan-American sound, the band bears the torch of it's bloodsoaked predecessors and ushers in a new era of venomous death metal.Following the magnetic horror of The Surging Throng Of Evil's Might demo, the band is poised to unleash the next chapter of parademonic madness through the aural codex aptly named The Anatomy Of Unholy Transformation. Presenting six sonorous incantations of funereal obsession, they have perfected the violent belligerence promised through it's previous rudimentary efforts. Driving the burning sword of damnation with searing speed, maniacal riffs and bellicose leads, this album delivers the inceptive sounds that originally marked death metal's ascendency as the ultimate force of destruction.