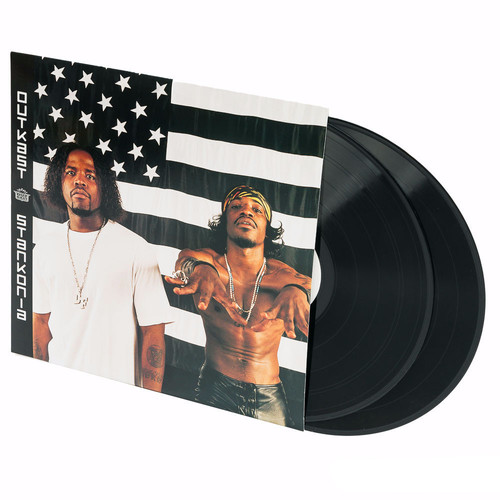 Stankonia is the fourth studio album by American hip hop duo OutKast, released October 31, 2000 on La Face Records. The group's previous release, Aquemini (1998), played a significant role in introducing Southern hip-hop to other areas of the United States. In the spring of 1999, OutKast began working on Stankonia in the duo's recently purchased Atlanta recording facility, Stankonia Studios. The band's ownership of the studio allowed for fewer time constraints and subsequently, more musical experimentation. Stankonia features appearances from many local Atlanta musicians whom the group discovered while visiting clubs in the city. On Stankonia, the duo hoped to create a chaotic musical aesthetic, and incorporated a diverse array of musical genres, including drum and bass, gospel, rock, salsa, funk, and psychedelia. Recording sessions became difficult as AndrĂ© 3000 wished to abandon his rapping vocal style in favor of a more melodic technique, an approach to which Big Boi and other producers were unaccustomed. In order to maintain musical cohesion with Big Boi and continue his musical evolution, AndrĂ© 3000 incorporated both techniques on Stankonia. Lyrically, the duo touches upon topics such as politics, misogyny, and personal introspection in an irreverent manner. The album debuted at number two on the U.S. Billboard 200 chart, selling over 530, 000 copies the first week. Stankonia received universal acclaim from music critics and holds an aggregate score of 95 out of 100 at Metacritic. The album produced three singles, "B.O.B", "Ms. Jackson", and "So Fresh, So Clean"; "Ms. Jackson" became the group's first single to reach number one on the Billboard Hot 100. At the 2002 Grammy Awards, OutKast won Best Rap Album for Stankonia and Best Rap Performance by a Duo or Group for "Ms. Jackson". In 2003, the album was ranked number 359 on Rolling Stone magazine's list of the 500 greatest albums of all time.
This website uses cookies to personalize content and analyse traffic in order to offer you a better experience.
I accept Learn More
back to top