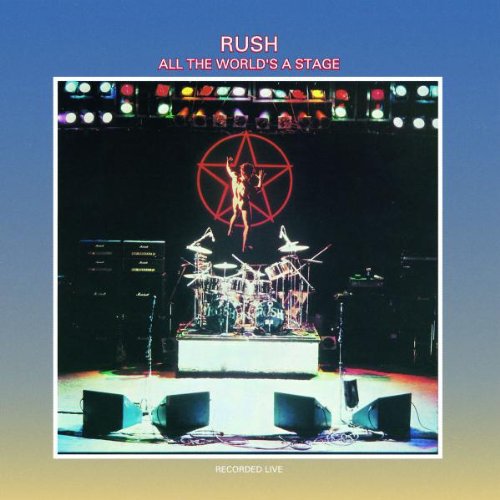 The complete version of this classic double live album now available on CD for the 1st time! Featuring 20-bit digital remastering from the original master tapes and deluxe packaging faithful to the original album release, highlights include great live versions of such favorites as "Anthem" and "Fly By Night/In the Mood," a 15+ minute performance of "2112," plus the track "What You're Doing," not available on the original CD release.

''All the World's a Stage'' is a double live album by Canadian rock band Rush, released in 1976. The album was recorded at Massey Hall in Toronto on June 11 through 13 during their ''2112'' tour. Similar to the track "Limelight" from 1981's album ''Moving Pictures,'' the title of this album alludes to William Shakespeare's play ''As You Like It''.

According to the liner notes, this live album (Rush's first) marks the end of the "first chapter of Rush," and would mark the start of a trend of releasing a live album after four studio albums. That trend was broken in the 2000’s when the band would release a studio album then a live album from the ensuing tour. Songs like "Bastille Day" and "Anthem" are similar to their studio versions with the addition of Neil Peart's drum solo during "Working Man".