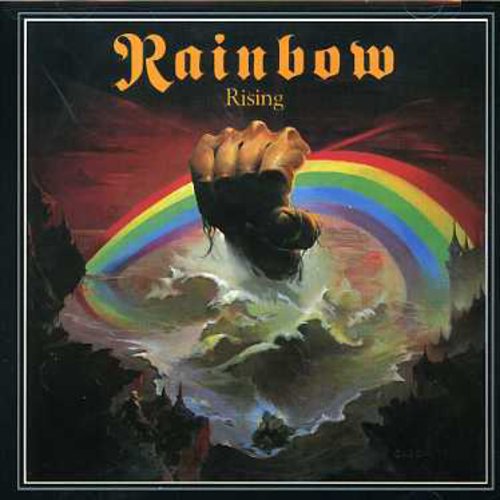 This title is part of Polydor's 1st wave of Rainbow reissues, featuring new digital remastering from the original master tapes and packaging faithful to the original LPs. Includes "Tarot Woman," "Run with the Wolf," "Starstruck," "Stargazer" and more.

''Rising'' (also known as ''Rainbow Rising'') is a hard rock/heavy metal album by Rainbow, released in 1976 (see 1976 in music). With founder Ritchie Blackmore retaining only Ronnie James Dio from the previous album, he recruited keyboard player Tony Carey, bassist Jimmy Bain and drummer Cozy Powell to complete the new line-up. Recorded in Munich in less than a month, the album was overseen by Deep Purple engineer and rock producer Martin Birch.

The album showpiece is the 8 minute and 26 second piece "Stargazer", which features the Munich Philharmonic Orchestra.

Few of the album tracks made it into the band's live set: "Stargazer" and "Do You Close Your Eyes" featured in all the 1976 shows, while "A Light in the Black" was dropped early in the tour. It was played at least 13 times in 1975-1976. "Starstruck" was played at least 16 times on stage - usually as part of "Man On The Silver Mountain".

According to the All Music Guide, Rising captured "Blackmore and Dio at the peak of their creative powers...(it) chronicled both the guitarist's neo-classical metal compositions at their most ambitious, and the singer's growing fixation with fantasy lyrical themes — a blueprint he would adopt for his entire career thereafter".

The original vinyl release was a gatefold sleeve, with a generic Polydor inner-bag.

The first CD issue had a slightly different mix to that of the original LP, including, for example, a longer delay before the band entered after Carey's opening solo in "Tarot Woman", a longer play-out on "Run With The Wolf" and the track "Stargazer" had the vocals mixed without the delay, the extra synthesizer deleted and some of the phased sounds deleted. When remastered in 1999 the original vinyl mix was restored.

The song "Stargazer" has been covered by Dream Theater on the album ''Black Clouds & Silver Linings'', by Mundanus Imperium on the album ''The Spectral Spheres Coronation'', and in Spanish by Argentine singer Adrian Barilari.

On September, 7 2010 the album will be released in Japan as a 2 SHM-CD(super high material cd) Deluxe Edition. This limited edition reissue will only be released in cardboard sleeve (mini LP) format featuring the "high-fidelity" SHM-CD manutacturing process (compatible with standard CD players) and is part of a two-album Rainbow cardboard sleeve reissue series featuring "Rainbow Rising" and "Down to Earth". Both will feature the unique to Japan only obi strip and a bonus disc featuring the latest remastering as well as a label-card with serial number. - Wikipedia