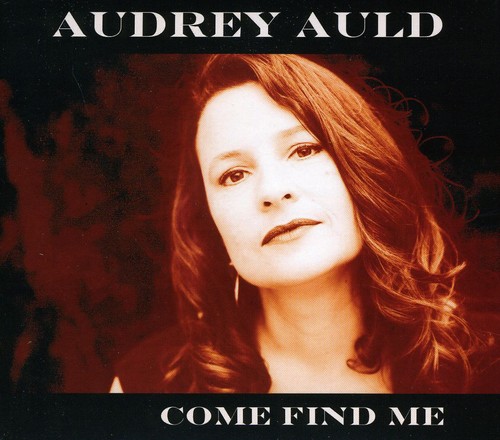 Don't mistake the title of Audrey Auld's Come Find Me as any kind of shy retreat. Call it what she does: an "invitation." "Come find me, come find me, I want to be found," she offers on the album's winsome opening waltz, then seals the deal with an offer hard to refuse: "You're welcome to glorious me." She sings it sweetly, but with a flirty flash of unmistakable, cocky cheek almost a dare, really, as befits a fiercely independent artist who's been self-releasing albums for more than a decade now under the tell all banner of "Reckless Records." Simply put, Audrey Auld does not do coy. Songwriter's songwriter Fred Eaglesmith calls the native Tasmanian "one of the most honest original artists I know," and, true to form, Auld is candidly forthright in her pride over Come Find Me, her fifth full length solo album and ninth release over all. "I'm really keen to show it off," she enthuses. Audrey Auld is an amazing talent. Like a special flower in your garden. Her songs are a kind of beacon of hope, from a woman who cares, in this deeply cynical world we are all stranded in. You need to relax more, play this album. Paul Riley, Country Music People, UK   Auld recorded Come Find Me with producer Mark Hallman (Tom Russell, Eliza Gilkyson, Hot Club of Cowtown) at the storied Congress House Studio in Austin, Texas. Although she's lived mostly in East Nashville (after a 3-year stint in California) since moving to the U.S. back in 2003, Auld has had a thing for the Lone Star State for years even naming one of her albums Texas. Not surprisingly, she calls working with Hallman long on her list of dream producers "a dream come true." "It was the happiest time I've ever had recording," Auld continues. "No stress, no problems. I wanted to focus on the performance and work with someone who would get the best out of me, and we wanted to make the best record I've ever made. I think we succeeded on both counts."   The end result is an album that's equally appealing both as an introduction to Auld for newcomers and, for veteran fans, as the latest and greatest in a long line of acclaimed releases going back to 1999's Looking Back to See, the country duets album she cut with Australian songwriter /guitarist producer Bill Chambers. Auld made an auspicious solo debut with the following year's The Fallen, which nabbed her a "Best Country Album" nomination in the Land Down Under, while subsequent releases like 2003's Losing Faith, 2005's Texas and 2006's Lost Men & Angry Girls secured her status on the Americana music map right alongside such notables as the aforementioned Eaglesmith, Kevin Welch and Kasey Chambers. Her dozen new songs on Come Find Me find her confidently moving from folk and country to swinging jazz, rock and even an intriguing bit of talking blues style rap (on "Petals"). That it all holds together as a seamless whole is testament to both her impressive artistic range and seasoned, devil may care confidence. "For me, it's more about the song than the genre," she says matter of factly.   Subject wise, the songs are equally diverse, ranging from the surprisingly tender (for Auld!) "Just Love," which she co-wrote with her husband, former Navy sailor turned "romantic" plumber Mez Mezera, to the conversely snarling rocker, "You Wish." It's also chock full of sincere, heartfelt tributes, with loving shout outs to her peers (Jon Dee Graham in "Petals" and Mary Gauthier in "Orphan Song"), civil rights icons Rosa Parks and Martin Luther King ("The Butterfly Effect"), her beloved homeland ("Tasmania") and even, with "Bread and Roses," the inmates of San Quentin Prison, where Auld has performed and teaches songwriting workshops. And what would an Audrey Auld album be without a Texas (if not Australia!) sized helping of her sassy humor In "Forty," the wickedly funny portrait of the artist as a hard traveled and hardened middle aged survivor, Auld observes with patented self-deprecating snark, "I got a little snow on my roof, I've learned to speak half the truth The good die young, here's the proof I'm forty."   "These songs represent where I am in my life and where I am on the Earth," Auld explains. "This collection of songs reflects the people I've met in my travels, the awareness of life passing, and my reflections of being in America. And I think it's also about the state of my heart, as a happily married woman. I'm very content with where I'm at right now troubadour, gardener, chicken farmer."   That's the Audrey Auld you'll find on Come Find Me. Who can fault the satisfied Tassie girl for feeling so, well, glorious?