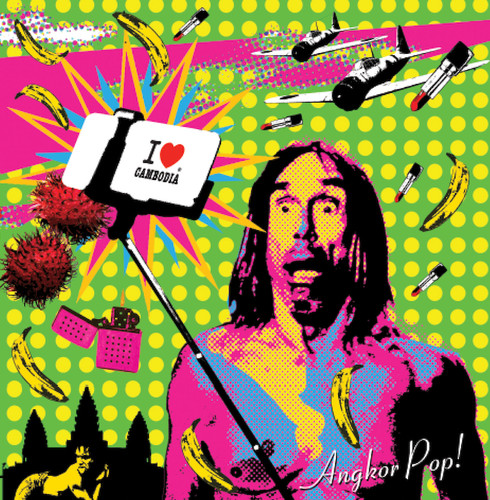 Vinyl LP pressing. Angkor Pop! Is an exotic and ambitious compilation project showcasing the very best of Cambodia's new wave of East/West fusion groups-an homage that marks several astonishing milestones in rock 'n' roll history: the 50th anniversary of The Stooges, the 40th anniversary of the seminal Iggy Pop/David Bowie albums The Idiot and Lust for Life, and, not least, the occasion of Iggy Pop's 70th Birthday!! The best of Cambodia's music scene-acts like The Cambodian Space Project, Doch Chkae, Kampot Playboys, Professor Kinski with Miss Sarawan and Jessica Lisha Srin, Bokor Mountain Magic Band, Phnom Skor just to name a few-each covering selections from Iggy Pop's astonishing back catalog-with the full blessing of the man himself, who seemed (and seems) rather chuffed with this tribute coming from far flung Cambodia. Read the full story inside the LP, penned by one of the masterminds behind the project, Julien Poulson of Cambodian Space Project, and starring the other mastermind behind the project, CSP guitarist Jason Shaw. Storms of Biblical proportions! Theft by cat burglars of the hard drive which contained all the recordings! Sleuthing and shady back alley deals on the mean streets of Phnom Penh! Soaring fever and emergency surgery! High drama, frame-ups, tension, crimes and misdemeanors, intervention and ultimately redemption: it all conjures up a single revered name, that of one lone lupine man at the pinnacle of the rock mountain-Iggy Pop!