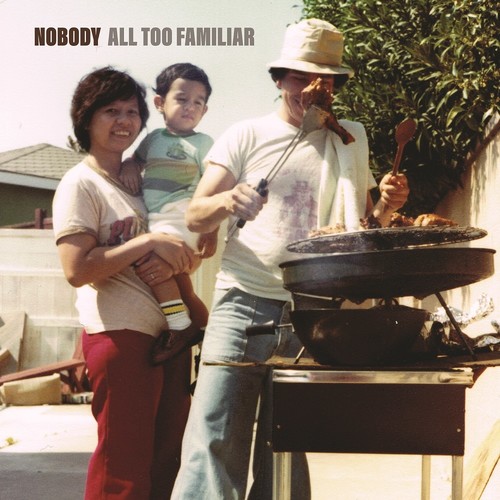 All Too Familiar
Artist: Nobody
Format: CD
New: Available In Store $14.99
Wish

Hypnotic, hazy and floating on a heavy but effervescent cloud, Nobody's "All Too Familiar" album sees the producer delving into his formative years as a college radio DJ when his sonic palette blossomed. With hip-hop as his foundation, and a newly found affinity for indie and alternative rock leading him to pick up a guitar, the doors to creating music outside of samples was opened. Equal parts Can, Radiohead, Tortoise, plus early DJ Shadow/Mo Wax and the amalgamation of all these sounds has brought forth his first fully instrumental solo record sans samples and primarily written on his guitar. The idea of including his family picture for a release had always been on his mind and this album afforded him the opportunity, made especially fitting as his main inspiration was revisiting his own early sounds and influences. He also enlists the aid of old friends and collaborators such as Blank Blue bandmates Brian Martinez on bass and Andres Renteria providing a unified yet varied drum sound throughout, Damon Aaron who played in the "live" interpretations of his early recordings adding guitar layers and frequent partner in beat production Eureka The Butcher (Marcel Rodriguez-Lopez) on keys and synth with Zach Burgenbauch rounding out the cast and lending his deft touch on the string arrangements.