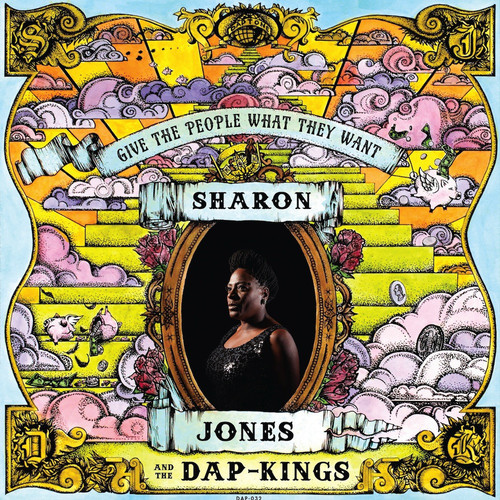 Give The People What They Want [Vinyl]
Artist: Sharon Jones & The Dap-Kings
Format: Vinyl
New: Available In Store 18.99
Wish

Give The People What They Want is certainly an appropriate title for Sharon Jones & the Dap-Kings' upcoming release. After more than a decade of nearly constant touring, recording, and as one of the most formidable and consequential live acts performing today, they know what their audience wants from them. They know, because its what they want, too. This, shall we say, je ne sais quoi --that makes everyone from Prince to Beck to John Legend to Michael Bublé to countless fans return again and again to the Dap sound -- is found both on stage and in the recording booth.

After two years of touring behind 2010's lauded I Learned The Hard Way, the band reconvened in Bushwick's Daptone House of Soul Studios and Daptone West in Riverside, CA to begin work on their fifth album.

The ten tracks they've delivered are what you've come to expect, even need, from the 11-piece band: the classic songwriting of We Get Along, the impressive energy of Retreat, and, solidified in Stranger To My Happiness, that kind of studio expertise that defines the band and their sound. It's those sharp, danceable funk grooves that stick to your bones; the fervent, impassioned singing that goes straight to your heart; and those sweet soul hooks that stay in your head for days on end. Give the people what they want, indeed.