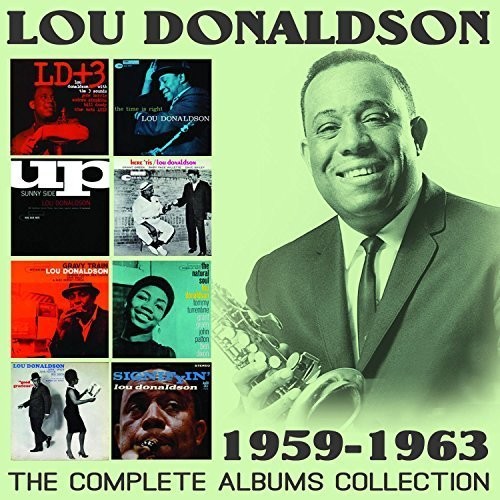 With a rich, soulful, blues-tinted sound and a catalogue of work that boasts a plethora of highly-regarded albums in his roles as both bandleader and sideman, the alto saxophonist known to many as "Sweet Poppa Lou" Donaldson - so called because his tone became increasingly that way - remains one finest purveyors of his instrument to have performed in the jazz idiom. And while many of his contemporaries continued to work in bebop during the 1950s, Donaldson instead broke away from the pack and developed a more R&B-influenced style and adopted unusual instrumentation, including the use of congas and organ. Although Donaldson often worked as sideman to organist Jimmy Smith throughout this period, appearing on no fewer than seven of Smith's albums between 1957 and 1963, his main focus was working as leader. He kicked off 1959 on a high with LD + 3 (Blue Note), a collaboration with The Three Sounds, a trio consisting of pianist Gene Harris, Andrew Simpkins on bass, and drummer Bill Dowdy. As the years progressed, Donaldson moved further away from bop and incorporated more elements of R&B and soul jazz into his repertoire, a shift which became notably apparent on the release of Here 'Tis (Blue Note, 1961). Featuring the exceptional organ playing of Baby Face Willette, the album became a cornerstone for the soul jazz sub-genre, and remains one of Lou's most acclaimed albums of the early 1960s. Donaldson left Blue Note for the first time in 1963, and signed to Argo Records with whom he released Signifyin', an album which boasted appearances from trumpet player Tommy Turrentine and organist Big John Patton.