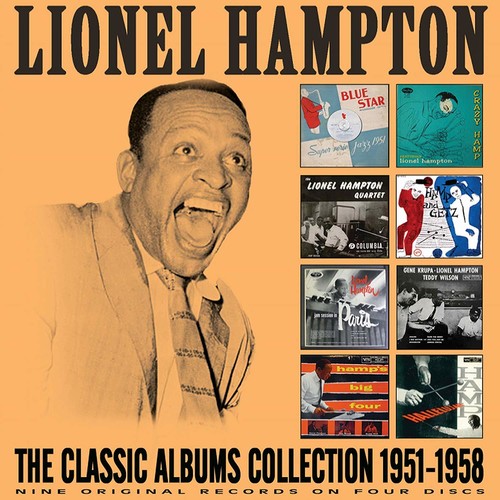 One of the most important figures in all of jazz and one who both witnessed and contributed to the genre's development through the bop age, Lionel Hampton was revered as a skilled and creative musician, as an exceptional composer and as a charismatic and exemplary bandleader. He was the first player to showcase the vibraphone as a leading instrument, and was a talented pianist, drummer and singer too. During his career, Hampton worked alongside numerous other jazz greats including Louis Armstrong, Teddy Wilson, Benny Goodman, Buddy Rich, Charlie Parker, Charles Mingus, and Quincy Jones - among others - both as a sideman and as leader. Hampton provided opportunities to those who he saw as the upcoming generation of musicians and his keen ear in this regard helped the careers of many future legends. During the 1950s in particular, Hampton and his groups produced some of their finest and most challenging work and it is from this era that the contents of this compilation are drawn. Although not again reaching the same peak as he had done in his glory years, Lionel Hampton remained active for much of the rest of his life, receiving numerous accolades in the process. Among these was being named an American Goodwill Ambassador by President Dwight D. Eisenhower in '57, he was also awarded a National Medal Of Arts from President Bill Clinton in 1996. Sadly, after collapsing on stage from a stroke in 1991, combined with years of suffering from arthritis, Hampton was forced to severely limit his recording sessions and live performances. He passed away on the 31st August 2002, aged 94. This collection celebrates the fantastic body of work that Lionel Hampton produced during the 1950s. Containing nine original records released between 1951 and 1958 - totaling over five hours of music - this set will not only serve as the perfect introduction for those yet to discover the majesty of Hampton's talent, but also as a welcome reminder for those versed in the great man's catalogue.