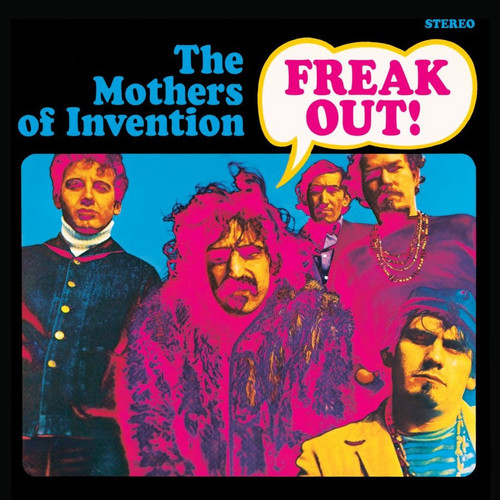 Freak Out
Artist: Frank Zappa
Format: Vinyl
New: OUT OF STOCK. Contact us for availability.
Wish

Freak Out! Is the debut album by American band the Mothers of Invention, released June 27, 1966 on Verve Records. Often cited as one of rock music's first concept albums, the album is a satirical expression of front man Frank Zappa's perception of American pop culture. It was also one of the earliest double albums in rock music (although Bob Dylan's Blonde on Blonde preceded it by a week), and the first 2-record debut. Mothers of Invention changed from an R&B covers band to performing Zappa's original material when he joined the group. Freak Out! Contains a range of musical styles from R&B, doo wop, and blues-influenced rock to orchestral arrangements and avant-garde sounds. In 1999, the album was honored with the Grammy Hall of Fame Award, and in 2003, Rolling Stone ranked it among the 500 Greatest Albums of All Time. "A master guitarist and provocateur, Frank Zappa made more than 60 albums, but the first was perhaps the most groundbreaking. The double disc declared the arrival of a visionary weirdo who dabbled in doo-wop, pop-song parody, protest tunes, art rock and avant-garde classical. " - Rollingstone This double 180 gram vinyl pressing was mastered by Chris Bellman at Bernie Grundman mastering..