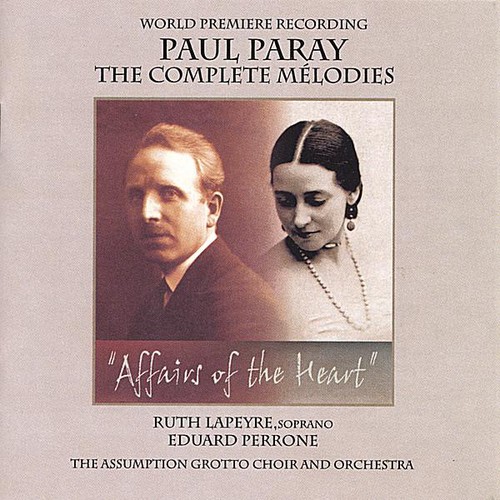 The Complete Mélodies of Paul Paray The renowned French conductor and composer, Paul Paray, was born in 1886 in Le Tréport. After studying music at the Maîtrise Saint-Evode in Rouen where he composed his first works, he continued his musical studies at the Paris Conservatory. Paray was awarded the coveted Premier Grand Prix de Rome in 1911 for his cantata, Yanitza. From 1911-1913 at the Villa Medici in Rome he composed most of his mélodies. Paray was elected associate conductor of the Lamoureux Orchestra of Paris in 1919 and named director of that ensemble the following year. In successive years, he was to assume several other conducting posts: at the Concerts Colonne, Monte Carlo, the Paris Opera, the National Orchestra, the Detroit Symphony Orchestra-with which he made several highly acclaimed recordings and then, for the remainder of his life, as guest conductor throughout the world. Paray left an all too small but diverse corpus of works that includes three symphonies, a Fantasy for piano and orchestra, a Mass, an oratorio, a ballet, cantatas, chamber music, sonatas, piano pieces, and some choral music. He died in 1979 at Monte Carlo at age ninety-three. Paray's poetic impetus is given free rein in his exquisite mélodies. This recording represents the complete known works for solo voice of Paul Paray. They are all published by Editions Jobert, Paris. This is first complete recording of his songs, 'Affairs of the Heart.' Also included here are premiere recordings of his three songs for choir and orchestra. The CD booklet contains original language texts (French and Latin) with English translations as well as program notes on each of the works recorded. CD #1 Song titles: Songs with orchestral accompaniment: 1 Le papillon 2 Infidelité 3 La dernière feuille 4 Serment 5 Après l'orage 6 Adieux 7 Après le bal 8 Désir de mort 9 Villanelle 10 La promesse 11 Le chevrier 12 La plainte 13 Il est d'étranges soirs 14 Nocturne (for violin and orchestra) Three songs for choir and orchestra: 15 Soleils de Septembre 16 L'aurore vermeille 17 Nuit tombante CD #2 Song titles (Song for voice and piano): 1 Emprise 2 Nuit d'Italie 3 Chanson violette 4 Sépulture 5 Champs de bataille 6 En un pays de Cocagne 7 Vocalise-Étude 8 Chanson napolitaine 9 Embarquement pour l'idéal 10 Viole 11 Mortes les fleurs 12 Paroles à la lune 13 Dans les bois 14 Le Poète et la Muse 15 Chaque chose a sa petite place 16 In manus tuas 17 Panis Angelicus The Performers: Ruth Lapeyre has been performing and teaching voice in the Detroit area since 1985. After winning several scholarships she took up vocal studies at New Orleans' Loyola University with Mary Tortorich and Larry Wyatt. She has been awarded many prizes in opera auditions of different cities of the USA and has continued studies with Jan Albright and Eugene Bossart. She performs solo works in orchestral concerts and chamber music recitals and often appears in opera, oratorio and Mass performances. Nadine Deleury, cellist, was born in Arras, France, near Paul Paray's native city, Le Tréport. Following studies at the Paris Conservatory with André Navarra and with Aldo Parisot at Yale University, she moved to Detroit where she holds the position of principal chair in the Michigan Opera Theater Orchestra and teaches cello at Oakland University, among many other musical activities. Adam Stepniewski is a graduate of the prestigious Chopin Academy of Music in Warsaw, Poland. Prior to his present position as Assistant Principal Second Violin of the Detroit Symphony Orchestra, he was Assistant Concertmaster of the Radio Orchestra of Copenhagen and of the National Philharmonic in Warsaw. Eric Everett, a vocal student of Mjerial Bigalli and Mario Laurenti, has performed with the Florida Lyric Opera Company and is a frequent soloist with the Assumption Grotto Choir and Orchestra. Eduard Perrone studied piano with Lee Luvisi, composition with Moritz Bomhard, and orchestral conducting with Jorge Mester. He was ordained a priest for the Archdiocese of Detroit in 1978. He is currently devoted to performing, recording and publishing, in cooperation with Editions Jobert, Paris, the music of Paul Paray. The Assumption Grotto Orchestra & Choir, Detroit, Michigan From the Critics... 'This two-disk set of Paray's complete songs is a labor of love. Indeed, the best of these songs deserve to join the standard repertoire of the French mélodie. Paray seems to have found his own voice early on, and the craftsmanship is consistently high. Ruth Lapeyre [is] a soprano whose bright, finely focused sound seems well-suited to Paray's music....she's a sensitive and often stylish singer. Perrone clearly knows the music inside and out.' Gramophone Magazine 'In many ways [Paray's] more interesting than other contemporary French composers who enjoy considerably more celebrity. I am impressed by the sound which in the orchestral portions matches the clarity, depth, richness, and perspective of anything by the major labels.' American Record Guide 'Each work displays a sensitivity alive to the nuances of language and the preservation of mood, with a wonderful attention to creative orchestral detail. [Ruth Lapeyre] has the intimate manner necessary for this music, and achieves some splendid effects. The orchestra comes up a winner with a sensitive and nuanced performance. Perone's conducting and accompaniment invatriably find the right tempo and dynamic balance. Highly recommended to listeners and fine singers in search of fresh material alike.' Fanfare Magazine 'There is sweetness pervading this music, whether secular or sacred. If you have any affinity for the quintessentially diaphanous French touch with these matters, I can highly recommend this string of musical pearls. I confess I succumbed, especially to the orchestral songs.' Crisis Magazine.