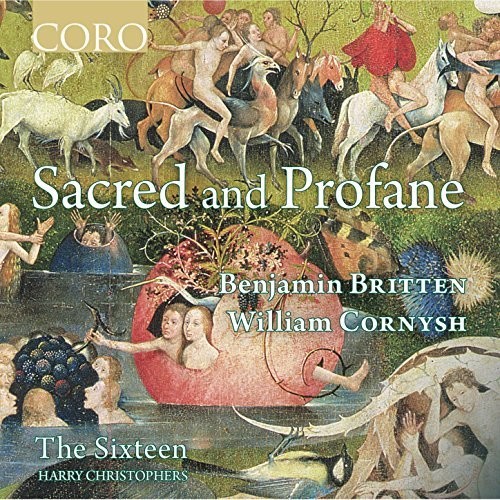 Over four centuries separate these two representatives of English music at it's finest. William Cornysh and Benjamin Britten were prolific in both sacred and secular music. Cornysh is actually two people, often confused with one another and quite possibly father and son. The matter of telling which man wrote which works is impossible to settle, so for the purpose of this album they are linked as one. So whether it be the Elder or the Younger, we are fortunate that they not only excelled at writing complex and adventurous antiphons for the church but also beautiful secular songs for the Tudor court. For Britten writing in the 20th-century life was very different; he is a composer who encompassed so many facets of music excelling in opera, solo song and all manners of vocal and instrumental music. This album looks at the way these composers mixed sacred with secular. Whilst Cornysh's sacred music is elaborate and rhythmically complicated, his secular music is simple yet subtly evocative. Britten makes constant demands on vocal artistry best displayed in the last work he ever wrote for unaccompanied voices, Sacred and Profane.