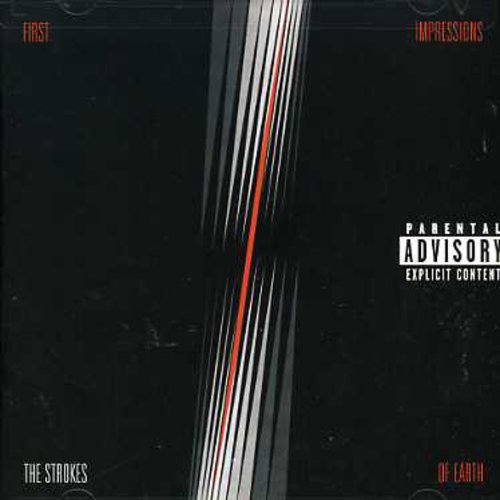 FIRST IMPRESSIONS OF EARTH is the third album from The Strokes, and it's 14 songs form an extremely persuasive argument that they are no longer just the most important band of their generation, but also well on their way to becoming one of the world's biggest bands, period. Features the single "Juicebox."

''First Impressions of Earth'' is the third album by the American rock band The Strokes. It was released in January 2006 (see 2006 in music), having been preceded by lead single "Juicebox" some weeks earlier. It is also the first album by The Strokes to have a Parental Advisory Label.

The album was recorded over a ten-month period. The Strokes initially set out to record it with Gordon Raphael, the producer of their first two albums. Later on, guitarist Albert Hammond, Jr. introduced them to Grammy Award-winning producer David Kahne (Paul McCartney, Tony Bennett, Sublime), who stepped in to collaborate with Raphael. However, the collaboration was not working out and so Raphael stepped down. As a result, the majority of the album was produced by Kahne.

''First Impressions of Earth'' is widely seen as an expansion beyond The Strokes' first two albums, ''Is This It'' and ''Room on Fire''. The album received mixed reviews from critics for not being quite the same standard as their previous material, which was universally acclaimed. "Heart in a Cage" was the album's second single, followed by "You Only Live Once". ''NME'' rated ''First Impressions of Earth'' at #8 in its Albums of the Year 2006 list.

''First Impressions of Earth'' entered the UK album chart at #1, The Strokes' first one at the top spot, while it reached #4 in the US, with an entry sales week of 88,000 units, somewhat below the performance of its predecessors. As of October 2006, the album had sold 271,000 units in the US, falling short of gold certification. Although the album was the band's first release to reach #1 on any chart worldwide, it is the only one not to reach UK platinum status, and spent much less time on the charts than the previous albums. - Wikipedia