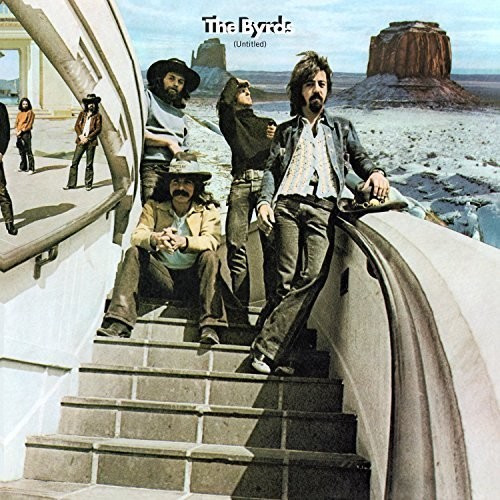 Limited edition double 180 gram blue colored audiophile vinyl LP pressing housed in a gatefold sleeve. It was a simple idea: take the folk song structure, wed it to a Beatle beat and count it off. That was the concept Jim McGuinn and Gene Clark were pursuing in clubs on the Sunset Strip when they met David Crosby. Together, these three young veterans of the folk scene recruited Chris Hillman and Michael Clarke to form one of the most influential rock bands of the 20th century. While they began as an innovative folk-rock hybrid, their adventurous muse took them on many musical paths, creating raga rock and country rock along the way. With Jim, later Roger McGuinn as the constant, the group played on through many lineup shifts and left an indelible mark on popular music. The band's unique Untitled double album is comprised of one LP of live recordings (the first official release of any live recordings by the band) from two early 1970 performances in New York City and a second LP of new studio recordings. For the concert side, you get seven classic rock champions like "So You Want To Be A Rock 'n Roll Star, " "Mr. Spaceman" and "Mr. Tambourine Man, " plus an entire side two taken up by the amazing "Eight Miles High." The nine-track studio sides feature such distinct '70s Byrds fare as "Chestnut Mare, " "Just A Season, " "Take A Whiff On Me" and "Hungry Planet." All in all, Untitled is hailed as one of the finest outings from The Byrds' latter-day line-up.