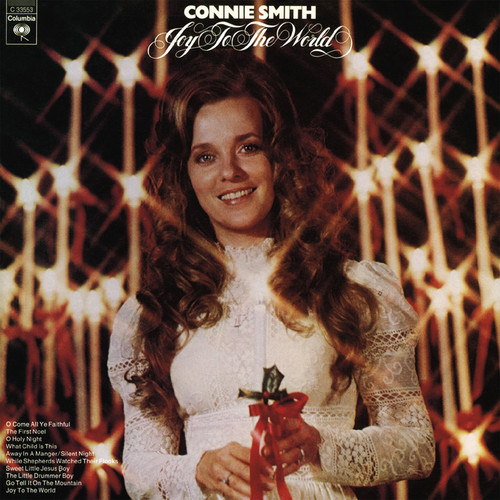 Joy To The World (Exp)
Artist: Connie Smith
Format: CD
New: OUT OF STOCK. Contact us for availability.
Wish

What do Keith Richards, Dolly Parton, Kris Kristofferson, and the late George Jones all have in common? All have counted themselves as fervent fans of Connie Smith. A true singer's singer, Connie has entertained fans for over fifty years with her singular blend of country-and-western, gospel, and pop. Along the way, she's earned thirty charting albums and three Number Ones, twenty top ten Billboard Country singles, eleven Grammy Award nominations, and inductions to both The Grand Ole Opry and The Country Music Hall of Fame. In 1975, Connie recorded her only full-length Christmas album, Joy to the World, for Columbia Records. This rootsy holiday celebration featured Connie, The Jordanaires, and a cast of "Nashville cats"-the city's finest session musicians-breathing new life into traditional melodies and spiritual favorites. Shockingly, this classic slice of seasonal Americana has never been released on CD... until now. Real Gone Music and Second Disc Records' expanded edition of Joy to the World premieres the original album on CD and adds one rare bonus track for a vivid and festive portrait of Connie Smith's Christmas classics. Connie wraps her rich voice around a selection of songs that have stood the test of time for centuries, among them "The First Noel, "O Come All Ye Faithful," and the stirring "Joy to the World," as well as spirituals "Go Tell It on the Mountain" and "Sweet Little Jesus Boy." As a special bonus, Connie's duet with fellow legend Willie Nelson on "Silent Night, Holy Night" has been included. Maria Triana has remastered at Sony's Battery Studios, and The Second Disc's Joe Marchese has written new liner notes... and as a special Christmas treat, Connie Smith herself has penned a new introduction to this reissue! Rousing and reverent, Joy to the World is a moving, homespun, and timeless treat from one of country music's most enduring and powerful voices.
This website uses cookies to personalize content and analyse traffic in order to offer you a better experience.
I accept Learn More
back to top