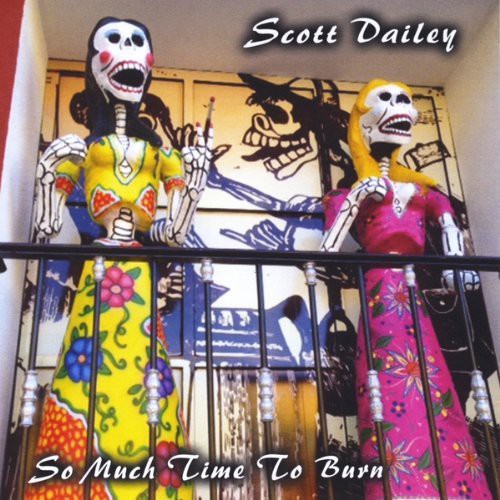 Scott Dailey is a talented and award-winning guitarist, songwriter and singer in the Detroit, Michigan area. Scott has performed in London, U.K., Rome, Italy, Nashville, Toronto, New York City, Chicago, California, northern Michigan and throughout North America. Scott's career began in his early teens playing guitar in a pop style which got people excited - Scott was the lead singer, songwriter and guitarist for the band The Stingrays, a very popular Detroit band who had hit records in the Detroit and Michigan area. Scott wrote nearly all the original music for The Stingrays as well as performing and touring through the country. Radio hits followed with "A Heart is a Hunter" and others, and Scott was the feature of video and radio for The Stingrays as he was the main composer in the band as well. As Inner Door Music recently said of Scott's style, "With a great voice, rough and soulful, inviting and warm, Scott writes songs that resonate with the audience. These are strong, heartfelt melodies that completely engage the listener. And when Scott starts singing, people stop talking and listen!" Scott's playing of acoustic guitar, electric guitar, bass guitar, mandolin, dobro guitar and even drums all accent Scott's great style, rocking, exciting guitar and passionate yet brooding intensity. Scott also worked in many other groups, including a band with Barbara Payton; Barbara also sang backup vocals with Kid Rock and now sings with Bob Seger on his current tours. Scott was the main guitarist and singer/songwriter in well-known Michigan artist Jill Jack's first band, as he and Jill traded lead singing duties before Jill went solo. Scott performed with Jimmy Bones (now with Kid Rock) and Karen Monster, a way cool singer/artist from Detroit, and Scott also had a group with legendary Dave Gilbert of the Rockets. Scott was the featured songwriter and guitarist in all these groups before joining popular Detroit artist Carolyn Striho, whom he has played with for the last six years. With Carolyn and Scott in the forefront of the band, their performances trade off Carolyn's energy and Scott's intensity, with a great band. Scott has done some fantastic shows recently, and played many festivals. Highlights include performing with Don Was at the Concert of Colors in Detroit in 2011, performing many times at Arts, Beats & Eats, the Midwest's largest festival, and two performances at the world-renowned Donne In Musica Festival in Rome, Italy. Scott also has signed with North Star Media of Detroit and Los Angeles for music placement. He has received several Billboard Magazine Honorable Mentions for his songwriting. He has been nominated for several Detroit Music Awards. Scott was also featured on the cover of the 2008 Fender American Series Guitar Catalog, recognized for his breadth of work and ability. A brilliant, positive artist, Scott Dailey's new music is beginning to garner a contemporary, growing base of new fans and friends.