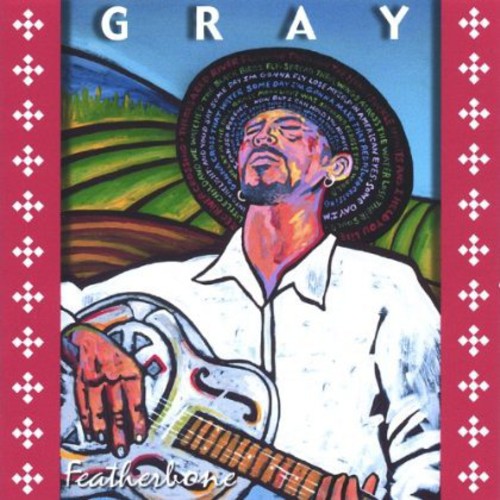 GRAY (Weaving Together Music And Art) Gray was born and raised in (Snake Hollow) Paint Rock, Tennessee. In this place he developed a sense of curiosity, discovery and imagination which he still pursues through his art and music. His work is rich in southern imagery, for example, from his song Brushy Mountain, Gray painted a convict, transformed into a blackbird, flying away from the remote East Tennessee prison with the lyrics of the murder ballad written across the sky. Like all of Gray's work, it is rendered in acrylic house-paint -- in this case on the side piece of an old church pew. Gray's art has been featured in the Oxford American and Time Magazine. Also, The Complete Hank Williams boxed CD set, featuring Gray's art, won a Grammy Award for design. His newest music and art is evocative of his childhood in Paint Rock, Tennessee near the Smokey Mountains where he was reared by his grandparents on a small farm. 'From an artistic point of view, I'm glad I went through that,' said Gray, describing an anachronistic life-style in the 1970s where he and his family had no plumbing. His recent paintings are of blackbirds, mules, and men cutting wood or curing tobacco, often with lyrics of his songs superimposed on the image. 'Sometimes I'll paint a memory and write out what I remember from it,' explained Gray. 'You could call this 'folk tales or songs mixed with painting'.' Gray's work is popular among Nashville musicians, but it has shown as far away as SoHo, New York and as nearby as the Tennessee State Museum in Nashville and the Country Music Hall Of Fame. Patrons of Gray's Art Time Magazine The Tennessee State Museum Country Music Hall Of Fame Writer/Director James Mangold Walk The Line (Cash Movie) The Center For Southern Folklore/Memphis Tennessee Mercury Records (The Complete Hank Williams) VH-1 Save The Music and Nashville River Stages NBA Star Pau Gasol Memphis Grizzlies Martin Guitars The Spencer Brownstone Gallery SoHo, New York The Oxford American Magazine Raw Vision Magazine NBA FedX Forum Memphis,TN Performances: WRLT Radio Lighting 100.1: (live on air performance) WDVZ Radio 89.9 (live on air performance) Robert Altman's (Cookie's Fortune movie premier) Holy Springs, Ms AM Nashville WSMV Channel 4: (Live television performance) The Blue Bird Cafe: Writers night unplugged Opryland Chevrolet GEO Theater: (with Mark Collie, Eddy Raven) Thacker Mountain Radio Show: (Live on air performance Oxford, Ms) Nashville River Stages: (with Steve Earl, and Todd Snider)