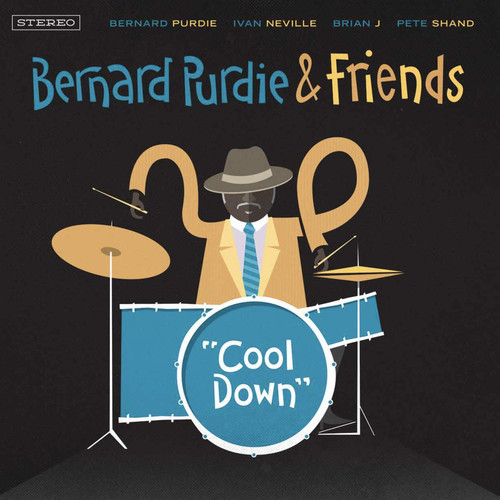 Self-proclaimed the "Most Recorded Drummer in History," Bernard "Pretty" Purdie is an American musical treasure. One of few artists who's shaped the rhythm of American music for more than half a century, Purdie returns to the spotlight with an original collection of 10 compositions for his first solo studio album in nearly a decade, Cool Down. Released on Record Store Day 2018, Cool Down features the legendary Bernard Purdie alongside modern funk, soul and jazz masterminds Ivan Neville, Pete Shand, and Brian J. Special guests include three inimitable vocalists Cyril Neville, Anthony Cole, and Mayteana Morales. Ranked among the "Top 20 Drummers of All Time" by Rolling Stone Magazine and inducted into Modern Drummer's "Hall of Fame," Purdie's idiosyncratic drum work can be heard on a staggering number of classic albums produced by artists such as The Beatles, James Brown, Nina Simone, B.B. King, Herbie Hancock, Miles Davis, Hall & Oates, and Steely Dan. His drum patterns, a unique merger of urbane swagger and loose Southern funk, have all but defined early hip-hop. Of his many solo recordings, his debut as a leader Soul Drums (1968) and Soul Is... Pretty Purdie (1972) are highly sought-after treasure troves of beats long sampled by DJs and hip-hop producers. Purdie's extensive list of accolades includes serving for five years as Aretha Franklin's musical director, and being the drummer for the Broadway revival of Hair in 2009. Enter the Cool Down recording sessions at Brooklyn's Vibromonk Studios to hear the leading-edge gospel music of today. No separate recording rooms, no drum isolation, no headphones, just pure musicianship at it's finest. "Bernard Purdie likes things mid-tempo," says Pete Shand (The New Mastersounds), co-producer of Cool Down along with Brian J. He continues, "There's nowhere to hide within the groove and Purdie wants that openness to live on it's own. Seeing him come alive in the sessions was truly amazing. The simple fact that he can still get back into that head space and bring us back to how he's always thrown it down on so many famous albums, his legacy is still being forged by new original music." Cool Down is representative of the fact that at the age of 76, Bernard Purdie remains a prominent fixture on the contemporary music scene. Purdie's deep sonic library to cull drum tones and patterns from, Cool Down takes the metropolitan sounds of East Coast funk and intermingles it with New Orleans rhythms. At the heart of songs "Cool Down", "Elevate," and "Keep On" are grooves that fans of The Meters and Funkadelic would come to expect Purdie to record with his fresh new band. The early '70s-esque standout single "Deep In Love" featuring Brooklyn's own Mayteana Morales is destined to become an instant classic. Filled with retro emotion, the synchronicity and mid-tempo progression is the perfect soundscape defining contemporary soul music. Cool Down keeps true to it's funk roots with standout instrumental numbers, "Shand Stand," "Money Bags," "Frank Funk," and "The Golden Tie." The jazz ballad "Better Man" is the album's most intimate moment with Anthony Cole's textured baritone caressed by Brian J's ethereal background vocals and psych-funk guitar work. Ivan Neville brings the NOLA flavor in full effect on "Keep On," a song that initially caught the band by surprise when they couldn't find the one beat while listening back to an outro the group recorded to capture the groove. Once back in the recording room, the first take was all they needed to get it down on tape. With Purdie straight on the beat and sparse as can be, "Stranded" elevates the blues tradition to historical proportions with Cyril Neville singing his heart out while Ivan Neville supports on Hammond B3. "Pete Shand knows my music and how I play, he and the other players have brought so much depth to the album," says Bernard Purdie. "After two and half days in the studio, we laid down a dynamite recording. I can't wait for my fans to hear it." On Cool Down, Purdie brings the same vibrancy and spontaneity that embodies the best work of his famed career. With his new core band and standout special guests abound, Cool Down marks one of 2018's singular soul & jazz albums.